Australia's central bank held the cash rate at 0.1% today and reiterated the need for the setting to remain unchanged until 2024 to help spark wage and inflation pressures, though it will pare its bond buying campaign.

The Reserve Bank of Australia (RBA) retained the April-2024 bond for its three-year yield target of 0.1%, as widely expected.

It also and announced a third round of its quantitative easing programme albeit a size smaller than the previous two rounds.

The RBA would continue purchasing government bonds past the present September deadline at a weekly pace of A$4 billion, rather than the current A$5 billion.

Analysts in a Reuters poll had expected a "flexible" setting.

In a short post-meeting statement Governor Philip Lowe said today's measures would "provide the continuing monetary support that the economy needs as it transitions from the recovery phase to the expansion phase."

Lowe reiterated the RBA's central scenario for the economy is that it will not meet its inflation and employment objectives before 2024.

The monetary stimulus and the government's fiscal support have boosted Australia's A$2 trillion economy, which is now larger than its pre-pandemic level.

The jobs market is tightening rapidly, the property market is heating up and consumer spending is buoyant.

However, Sydney, Australia's largest city, last week entered its strictest coronavirus lockdown since the pandemic began while partial curbs were imposed across other major cities. 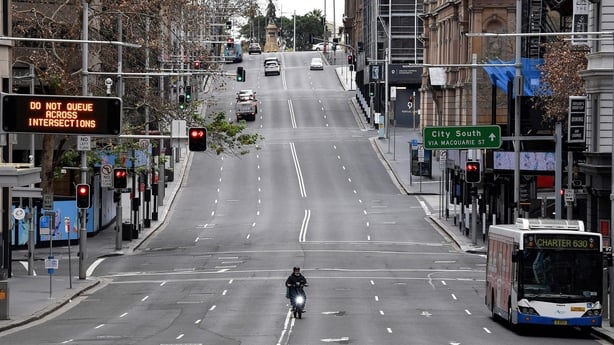 These restrictions threaten to take some shine off Australia's stellar economic performance amid a sluggish and dysfunctional vaccination rollout with just about 9% of the adult population inoculated so far, among the lowest in the developed world.

"Australia's slow vaccine roll-out by developed market standards suggests the RBA is right to not to get too carried away with the recovery," said Anthony Doyle, cross asset investment specialist at Fidelity International.

The RBA's dovish tilt contrasts with its New Zealand counterpart, which in May became one of the first advanced economies to signal a move away from the stimulatory settings adopted during the Covid-19 pandemic.

Some economists now expect the Reserve Bank of New Zealand (RBNZ) to start hiking interest rates from later this year led by a solid economic recovery from the pandemic.

Most Australian economists do not see an RBA rate hike until mid-2023.