The Economic and Social Research Institute is forecasting double-digit growth in the economy this year.

In its latest Quarterly Survey, the ESRI predicts the economy will grow by just over 11% mainly due to strong demand for exports.

The ESRI believes the recovery in the economy is well under way and will pick up pace in the second half of this year.

Strong demand for exports of medical and pharmaceutical products as well as computer services is expected to push growth in GDP terms to 11.1% this year. Growth in the domestic economy is expected to be 6.4%.

Unemployment, however, is still expected to average out at just over 16% this year before falling to just over 7% next year.

The ESRI has restated its view that favourable growth and financing conditions gives the Government more leeway to borrow additional funds to invest in housing, although it does support a return to normal levels of current spending on services.

The report also estimates that the potential loss to the economy from Covid-19 is approximately €24 billion.

This is based on the output that otherwise would have happened in the economy, if there had been no pandemic emergency.

The report also notes that the impact of Covid-19 has been uneven across the economy. It notes that over 70% of small and medium sized companies saw a drop in sales during the first wave of the pandemic.

It says that many of these firms may experience a rebound in the second half of this year which will prove critical to their survival.

By contrast, demand continues to grow for medical and pharmaceutical exports and exports of computer services. Both sectors are dominated by multinational companies. 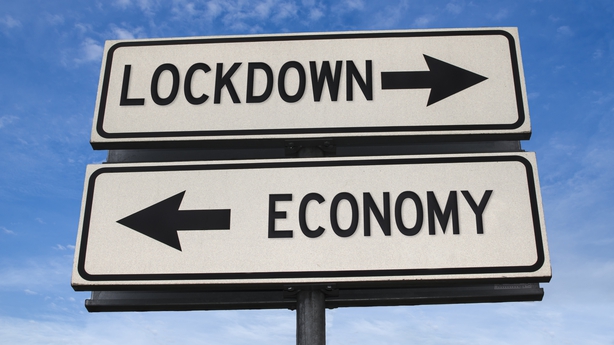 The quarterly update also notes that stricter trade rules between the UK and the EU will "almost certainly have a negative impact on trade", even though there is still "a significant degree of uncertainty" over the timing of future Customs checks and the Northern Ireland Protocol.

Kieran McQuinn, Research Professor at the Economic and Social Research Institute, said that demand for Irish exports held up, and in some cases increased, during the pandemic.

This, he said, combined with the expectation that domestic sources of demand are likely to pick up means that the economy should grow this year.

However Professor McQuinn said growth will be relatively unequal because certain sectors of the economy - such as hospitality and tourism - have been devastated by the pandemic will continue to struggle.

Speaking on Morning Ireland, he said that there has been a significant drop in imports from the UK as a result of Brexit, but that exports have been relatively unaffected.

Professor McQuinn said that there is a short term challenge in restoring order to the public finances but these should come back into order as the economy improves.