The unemployment rate, when adjusted for those on the Pandemic Unemployment Payment, was 21.9% last month, the latest figures from the Central Statistics Office show today.

The number of people this represented was 487,122.

The CSO estimates that approximately 8.1% of all PUP recipients are in full time education.

It is estimated that approximately a third of those under 25 receiving the PUP are in full time education while 1.3% of those over 25 are in this category.

People in full time education are generally not eligible for unemployment payments.

Based on the traditional method of measuring unemployment, the CSO said that 7.8% of the workforce were unemployed in May, down from 7.9% in April. This equated to 174,700 people, down from 181,300 the previous month. 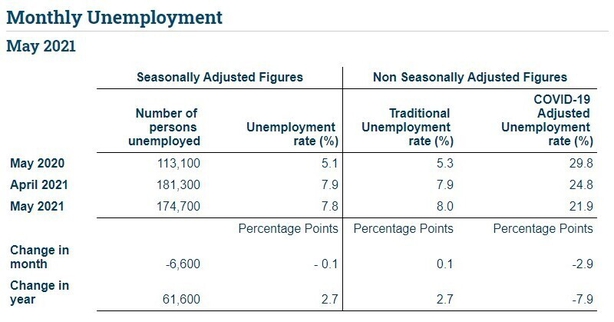 The CSO also published its Labour Force Survey for the first quarter of 2021 today.

The survey showed there were 7.6 million fewer hours worked in the first three months of the year compared to the same time a year ago - a fall of 9.9%.

The CSO said this is largely down to a 48.5% increase in what are defined as "absences" from work. Absences were greatest in the accommodation and food service sector as well as cultural and recreational occupations. 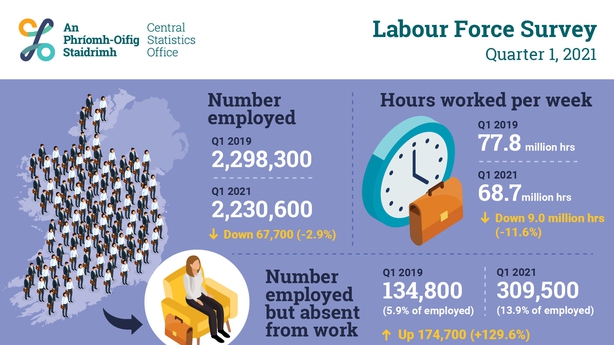 The Covid-adjusted unemployment rate was 25.7% at the end of March, which equates to 612,443 people out of work.

There were 60,800 fewer people in the labour force at the end of March compared to last year. This has reduced the participation rate from 62.2% to 60%.

Commenting on the figures, Tánaiste, Leo Varadkar said they expect next quarter’s results to be "a lot more positive".

"We are aiming to have 2.5million people in work by 2024 with our Economic Recovery Plan, more than we had pre-pandemic," he said.

"Things are looking up but today’s numbers are a stark reminder of the cruelty of the virus and how many people have been impacted," he added.