Small and medium Irish employers are warning that the Pandemic Unemployment Payment (PUP) is acting as "a significant brake" on returning workers in certain sectors of the economy and should be "tapered" faster than currently planned.

Neil McDonnell, the CEO of Irish Small and Medium Enterprises (ISME), told an Oireachtas Committee that this is affecting sectors including agriculture, hospitality, beauty services and accommodation.

The Joint Committee for Trade, Enterprise and Employment is considering challenges around the reopening of businesses shut down during the pandemic.

Mr McDonnell said that "significant disincentives" to returning to work exist in the €18,000 - €30,000 income bracket and is a "particular issue" for part-time workers.

But the Irish Congress of Trade Unions dismissed this as "a baseless claim".

Dr Laura Bambrick, Social Policy & Legislative Officer with ICTU, said the affected sectors are "disproportionately reliant on cheap migrant labour", many of whom have either gone home or moved into retail.

Sinn Féin's Louise O'Reilly said evidence shows that when you "pay workers well and treat them decently", there is no problem hiring staff.

Dr Bambrick also said that Congress was taken "by surprise" by recent remarks by the Taoiseach and Tánaiste "relating to a possible early return to the office".

ICTU believes that the phased return of workers must "continue to be guided by public health advice and not unduly influenced by city centre businesses", she said.

Patricia King, General Secretary of the Irish Congress of Trade Unions (ICTU), said she was "surprised" by the Tánaiste's comments that workers could return to workplaces in August.

Speaking on RTÉ's News at One, Ms King said there are "a number of things" that still need to be discussed in relation to the return of what she described as a "large" cohort of the workforce to offices.

"Office spaces by their very nature are very cramped. We don't know in August, September, what sorts of social distancing rules will be required, and what PPE will be required," Ms King said.

"We also have issues in relation to the ventilation of these offices. There is a particular cohort within that grouping of younger office workers who are returning and won't necessarily have received vaccinations or had double vaccination," she added.

She also said that "returning to the old ways of public transport" are no longer conducive to good operations.

Ms King said remote working or blended working model still need to be "seriously discussed" as well as the availability of flexibility in workplaces.

Mr McDonnell also noted that more than two thirds of workers in Ireland work in SMEs, which are currently reopening.

"The two biggest players in this are going to be the landlords and Revenue", he said.

"There is 30% non-occupancy already in Henry St - Mary St", he said, adding that the situation is worse outside Dublin. 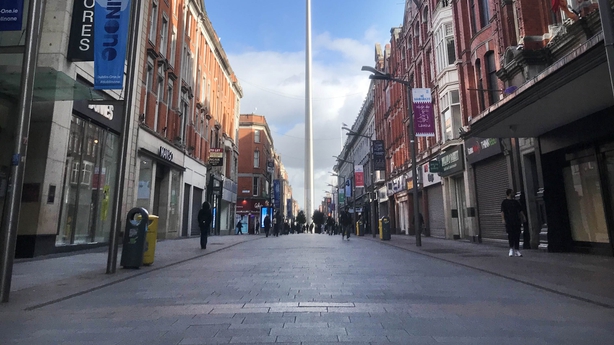 He called on landlords to "get their heads around" the "fundamental reset" which is occurring and warned that lease values will fall.

While there has been "remarkably few insolvencies," ISME warned that - without urgent action - this "is set to rise and quickly".

Mr McDonnell also said that the 9% VAT rate for hospitality should be maintained, and the higher rate should revert to 21% "permanently".

Redundancy payments are also "a significant cost" to employers, he said, and urged that the statutory redundancy rebate should be reinstated.

There is a "disgraceful lack of clarity" around the rights of employers and employees to know the vaccine status of workers returning to work, he said.

He also said that there is a lack of communication between the sector and Government which is "unsustainable" and having a "serious impact" on the Work Safety Protocol.