65% of respondents in the construction sector reported an increase in prices as their biggest Brexit concern for 2021.

Meanwhile, 38% of responding SMEs said a difficulty in transporting goods to and from the UK was their biggest Brexit concern in 2021.

In the Services sector, 38% of respondents said that difficulty in transporting goods to/from the UK is their biggest concern.

This was followed by an increase in prices (36%) and a decline in business from UK customers (26%).

47% of respondents in Industry said that transporting goods to/from the UK is their biggest concern.

Today's survey also shows that more than 60% of respondents had taken no steps in preparation for Brexit.

Among those that did take action, 13% of respondents sought new suppliers and 8% increased preparedness for new custom procedures and duties.

In all sectors, 5% or less respondents believed that Brexit would have a positive impact on business in 2021.

More than half of respondents in the Wholesale & Retail Trade and the Industry sectors believed that Brexit would have a negative impact on business in 2021. 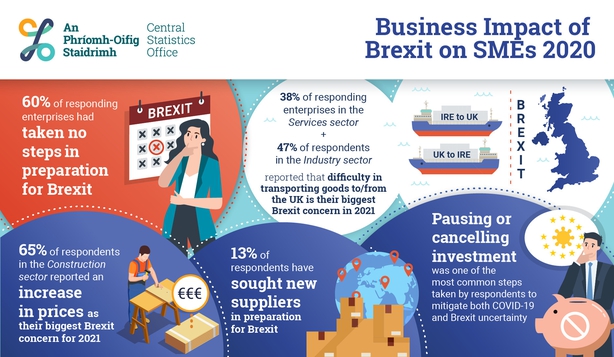 Today's CSO survey also showed that in terms of steps taken to mitigate both Covid-19 and Brexit uncertainty, 39% of responding businesses took no steps.

Among those that did, the most common were pausing/cancelling investment (13%), implementing a pay freeze (13%), increasing digitisation (12%) and reducing their work force (11%).

The CSO online survey was sent to a sample of 8,000 businesses and the information was collected in the first quarter of 2021.

The response rate to the survey was 24%.