All workers are to get a right to be paid for up to ten days of sick leave per year by 2025, under plans agreed by the Government today.

The new scheme is to be phased in over the next four years to give employers time to plan ahead for the extra costs.

Under the proposed Sick Leave Bill 2021, employees will be entitled to three days per annum from next year, effectively filling the gap in coverage caused by Illness Benefit waiting days.

That will rise to five days the following year and then seven days in 2024, before reaching the maximum of ten days each year in 2025.

"Ireland is one of the few advanced countries in Europe not to have a mandatory sick pay scheme," said Tánaiste and Minister for Enterprise, Trade and Employment Leo Varadkar.

"Although about half of employers do provide sick pay, we need to make sure that every worker, especially lower paid workers in the private sector, have the security and peace of mind of knowing that if they fall ill and miss work, they won't lose out on a full day's pay.

"I believe this scheme can be one of the positive legacies of the pandemic as it will apply to illness of all forms and not just those related to Covid."

Employers will have to make the payments at 70% of an employee’s wage, a rate the Government said should not place an excessive burden on employers who have to backfill for sick staff.

An impact analysis carried out by the State estimates this to be equivalent to a 2.6% pay increase in terms of value to the average employee who currently receives no sick pay from their employer.

It will be possible for the Government to vary this amount to keep it aligned with inflation and incomes using a ministerial order.

According to the Government, the bill will provide a minimum level of protection to low paid employees without an entitlement to company sick pay schemes.

But the new laws will clearly state that this does not prevent employers from offering better terms or unions negotiating for more.

To avail of the scheme, an employee will have to get a medical cert and will have to have worked for their employer for at least the previous six months.

After the employer sick pay period ends, if further time off is required the employee may qualify for illness benefit from the Department of Social Protection.

The Irish Congress of Trade Unions has welcomed as "decades overdue" the the principle of employers being responsible for workers when they are sick being recognised in law.

Dr Laura Bambrick, head of social policy with ICTU, told RTÉ's News at One that "unfortunately we needed a global pandemic to get us here".

Saying the "devil will be in the detail", Dr Bambrick welcomed the fact that the measure will be pay-related, not a flat-rate and therefore based on a proportion of the employee's wages.

Dr Bambrick said there will be no waiting days, which will allow qualification from the first day of sickness, but added the need for a medical certificate could be restrictive for some people.

She said that the fact a worker must be in employment for at least six months to benefit from sick pay may create a "perverse" situation where employers favour casual employment to avoid paying the entitlement.

Dr Bambrick said that phasing in the measure is normal practice and that ICTU will watch to see how it is implemented if the economy improves.

She said that in other European Union countries measures have been put in place to protect small businesses and where there is a genuine inability to pay, the State picks up the costs. 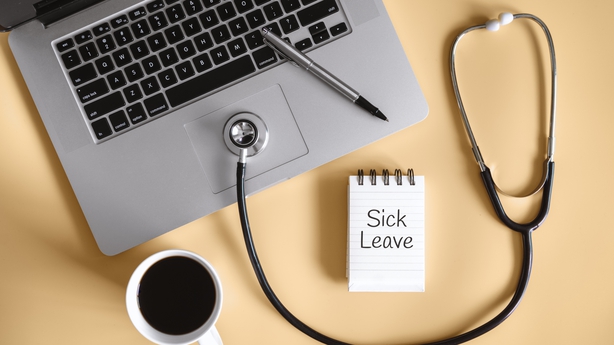 Maeve McElwee, director of employer relations with IBEC, has said the new statutory sick pay scheme has been announced at a "challenging time" for employers.

Speaking on RTÉ's Drivetime, Ms McElwee said for many employers, who do not have a sick pay scheme in place, the "costs will be substantial".

She said: "I don't think this is necessarily an opposition in principle to being able to introduce sick pay, but it is without a doubt a very challenging time for employers to introduce sick pay at a time when many of them have their businesses closed for the best part of a year and are only starting to see a recovery."

Speaking to the media following today's Cabinet decision, Mr Varadkar said that it was hoped the bill would be enacted before the end of the year and that the scheme would begin from 1 January 2022.

He said it is simply not good that people who are sick are afraid to take time off because they will lose income.

The new scheme will apply to all employees in all workplaces, with no exceptions, provided the employee is at least six months on the job, he added.

"I’d ask employers to consider that during the course of the pandemic, employers and small employers in particular have received exceptional support from the State, from the taxpayer," he said.

"Part of what we are asking back is that they come with us on a journey of improving pay and conditions of their staff and that includes sick pay and includes the living wage."

Mr Varadkar said the €110 a day threshold is a floor, not a standard, and employers can give more if they wish to.

He said this is a new right where none previously existed, and as a result he hopes the Opposition supports it.

Mr Vardakar said parties in control in Northern Ireland need to "pull their socks up" because there is now a widening gap on workers rights, welfare, and pensions between north and south, which is bad for people in Northern Ireland and for employers in the Republic, who have to compete with others across the border.

He said Labour Party proposals on sick pay would benefit the best-off workers the most and are also for six weeks, which the Government thinks would be too much for small employers.

Mr Varadkar said it would be up to individual employers as to whether they seek a doctor's cert, but legally they would be entitled to.

On the issue being faced by some employers in recruiting workers who are currently on the Pandemic Unemployment Payment, Mr Varadkar said he thought it was probably overstated.

He said a lot of workers have left the country, and others found jobs in other sectors, and employers may have to consider paying a little better than they did in the past to get workers back.