Australia's economy raced ahead last quarter as consumers and businesses spent with abandon, lifting output back above where it was last year when pandemic lockdowns tipped the country into its first recession in three decades.

The economy expanded by a real 1.8% in the three months to March, data from the Australian Bureau of Statistics (ABS) showed today.

Economists in a Reuters poll had forecast a 1.5% rise following an upwardly revised 3.2% gain in the fourth quarter.

The better than forecast figures pushed Australia's benchmark share index to record highs while supporting the local dollar near a one-week high.

Australia is in rare company here with only five other countries boasting an economy that's larger than before the pandemic, said Kristian Kolding, a partner at Deloitte Access Economics.

On average, Australia's rich world peers are 2.7% smaller than they were before the pandemic, Deloitte's research found.

The UK economy has shrank almost 9%, the European Union contracted by 5% and the USis 1% smaller.

Australia announced strict social distancing rules in late-March 2020 to curb the pandemic, forcing businesses from retailers to cafes and restaurants to close while leading hundreds of thousands to queue up for welfare payments.

But the A$2 trillion economy has since staged a remarkable comeback by keeping virus numbers in check which has allowed businesses to reopen with confidence.

Hefty and timely monetary and fiscal stimulus have been beneficial too.

"Families are spending locally, and businesses continue to invest, making the most of record low interest rates and tax offsets," Kolding added.

Today's data showed the first-quarter expansion was driven by private investment which contributed 0.9 percentage points to growth with machinery and equipment investment clocking its strongest quarterly rise since December 2009.

"Underpinning all of that is continued strength in jobs numbers," Kolding added.

Australia's employment is higher than before the pandemic while measures of underemployment and unemployment have slipped rapidly though they are still above levels the country's central bank believes is needed to spark wage pressures.

The Reserve Bank of Australia (RBA) has welcomed recent strength in data but has reiterated it will not raise the cash rate from its record low of 0.1% until inflation was sustainably within its 2-3% target band.

For that to occur, the RBA says the jobless rate will need to fall to or below 4% from 5.5% currently and wage growth will have to double to at least 3%, conditions the central bank believes are unlikely to be met before 2024 at the earliest.

Analysts were circumspect about the outlook given slow Covid-19 vaccine rollout across the nation and an extension of a seven-day lockdown in Australia's second-most populous city Melbourne by another week to stop a rapidly-spreading coronavirus strain. 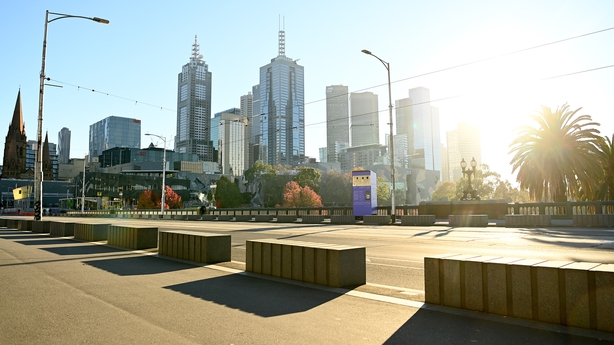 "This lockdown will be the first lengthy one without JobKeeper so we need to be a bit more cautious about how the recovery may look," ANZ economists wrote in a note, referring to a government welfare payment.

Australian Treasurer Josh Frydenberg today hinted at some fiscal support for Victoria, which has been under lockdown since last week.

A lockdown in the capital city Melbourne has been extended, while some restrictions will persist elsewhere in the southern eastern state.

KPMG economists say the lockdown is costing the Victorian economy A$125m a day.