It is widely expected that the Cabinet will approve and publish the Government's National Economic Plan next week.

This will outline policies to promote the recovery of the economy and chart its future path. It is part of the Programme for Government and was originally expected in October.

There was still a lot of uncertainty back then over where the pandemic and Brexit were leading us.

There still is a lot of uncertainty about but thankfully, a gradual path that takes account of both ongoing risks is emerging.

The plan is also expected to detail how the Government hopes to begin to reduce the extraordinary level of support to incomes and businesses as the pandemic recedes and the economy returns to normal.

The main focus of the plan will be to get people back to work. Official forecasts are for unemployment to remain at 16% this year before falling to 8% next year.

I understand the National Economic Plan will set an ambitious target of 2.5 million people in employment by 2023, which would mean more people in work than in 2019 - pre-pandemic.

There was a call for submissions on the Plan back in October when its main themes were outlined.

The Programme for Government also sketched out many of the priorities.

So, expect to hear more about "future proofing our economy and society" and an "inclusive and balanced recovery".

This will translate into retrofitting homes and businesses to make them more energy efficient, retraining for future skills needs and supports for small and medium sized enterprises, in particular.

If the Government heeds the advice of the Irish Fiscal Council this week, the Plan won’t include a broad stimulus which would pump money into the economy.

The Council's view is that the Government has already pumped in a huge amount of money through various supports and schemes.

It also believes that it’s already the case that consumers themselves are providing a boost and more will come as at least some of the savings built up during the pandemic are spent.

The pressing and persistent question also raised by IFAC this week, of how grand plans dovetail with budgetary arithmetic, probably won’t form part of next week’s announcements.

That will have to wait until the Department of Finance publishes its Summer Economic Statement next month. Any maybe not even then. 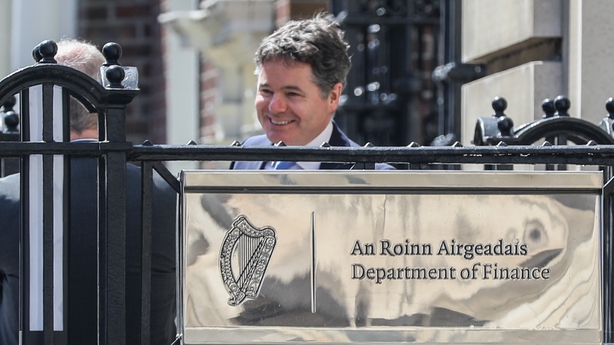 At this point, it’s perhaps useful to dust down the last time a medium term economic plan was published, back in December 2013.

"A Strategy for Growth" is a relatively unflashy document, printed up in a patriotic green typeface. It was published just after Ireland exited the bailout programme.

The first and overriding priority in that plan was "ensuring debt sustainability".

Both economic growth (even if GDP doesn’t capture what’s happening in the domestic economy and gives a rosier picture of our debt position than is probably the case) and growth in jobs turned out better than planned.

But no one back then considered Brexit or Covid-19 - two events which frame our current turning point.

Plans are a good starting point to figure out where we should be going next. But you can’t plan for everything.