The accumulated value of foreign direct investment in Ireland rose to over €1 trillion in 2019, according to new analysis from the Central Statistics Office.

A broader measure to include add-on investments and to exclude some investments like intellectual property puts greenfield investment at 20.66% of FDI in 2019 compared to 46.2% in 2014.

The report estimates that 31% of FDI into Ireland can be classified as "pass through". This means it comes into Ireland and subsequently leaves for another jurisdiction.

Approximately 6% of FDI is comprised of so-called "special purpose entities" (SPEs) which are defined as companies that do not engage in production or services but are used to hold financial assets or liabilities.

The analysis by the CSO says that over half of the "Irish" companies that own direct investments abroad are in fact "redomiciled PLCs". These are companies that would have been headquartered in other countries originally but have moved to Ireland, usually for tax purposes.

Redomiciled PLCs employed just over 11,000 people in their operations in Ireland. 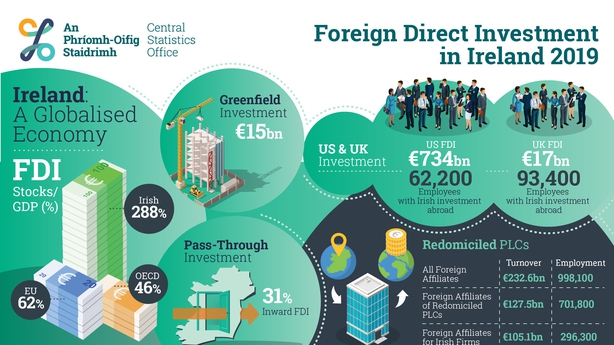 The report noted that the amount of FDI coming from the US increased significantly when intellectual property assets were registered in Ireland from 2015.

The report also reveals how highly concentrated FDI is in Ireland. The top 25 firms make up 71% of investments here.

The same 25 firms account for the lion's share of profits expatriated from Ireland. 81% of the profit flows went to US companies with manufacturing as their main activity.