German investor sentiment surged in May to its highest level since the start of the Covid-19 pandemic thanks to a third wave tailing off, pointing to a big upswing in Europe's largest economy in the coming six months.

The ZEW economic research institute said its survey of investors' economic sentiment rose to 84.4 points from 70.7 the prior month.

The last time it hit a higher level was in February 2000. A Reuters poll had forecast a rise to 72.

"The slowing down of the third Covid-19 wave has made financial market experts even more optimistic," ZEW President Achim Wambach said in a statement.

"The experts expect a significant economic upswing in the coming six months," he added.

Health Minister Jens Spahn said last Friday the third wave of the pandemic appeared to have broken in Germany.

A separate ZEW gauge of current conditions rose to -40.1 points from -48.8 the previous month. That compared with a consensus forecast for -41.3 points.

Despite the upbeat readout on investor morale, many businesses - particular those in the retail sector - are still suffering.

More than half German clothing retailers say they risk going out of business without further state aid this year, a survey showed, as official data also released today showed a let-up in insolvency pressures, if only temporary.

Turnover for non-food retailers is down by some €40 billion in the first five months of the year compared to the pre-pandemic period, the HDE retail association said, reporting the results of a survey of some 1,000 businesses in the sector.

"For locked-down retailers, 2021 has been a disastrous year so far," said HDE chief Stefan Genth. "Sales in the affected sectors are expected to be around 60% below pre-crisis levels on average by the end of May." 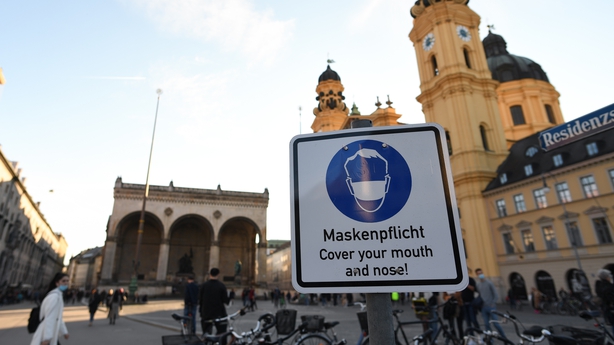 Provisional Federal Statistics Office data showed new insolvency proceedings, which give an indication of the future path of actual insolvencies, fell 17% in April from the previous month. That followed rises of 37% in March and 30% in February.

"We think that the latest decrease is largely a technically driven breather after exceptionally strong rises in the previous two months," said Andreas Rees, economist at UniCredit.

"It is likely that corporate insolvencies remain on an upward trend for the time being."

Actual corporate insolvencies in Germany fell 21.8% on the year in February, the Statistics Office said, continuing a downtrend since the introduction of a waiver at the start of the pandemic.

The February figures meant "that the economic problems of many businesses due to the coronavirus crisis were not yet reflected by an increase in reported business insolvencies", the office added.

Germany let firms that were struggling with the crisis delay filing for bankruptcy from March last year - though critics said the policy would only end up propping up "zombie companies" with no viable future.

Insolvencies duly fell, hitting their lowest level since 1999 last year. But since October, Berlin has phased out the scheme.

This year only firms awaiting state aid provided since November were exempt from filing - until this month.