The Irish Tourism Industry Confederation has urged the Government to introduce a one-off bank holiday this September.

The ITIC said that creating an additional bank holiday at the end of September would stretch the domestic tourism season as well as reward a hard-pressed public.

The business group represents all key tourism and hospitality stakeholders - including Aer Lingus, the Daa, the Irish Hotels Federation and the attraction sector.

It said that with only nine bank holidays, Ireland compares unfavourably to the rest of Europe.

He said the confederation has been calling on the government to introduce an additional bank holiday since last year, but he said a one-off this year "would be easier for the government".

O'Mara Walsh said Ireland’s domestic summer market is "short" as he said it ends as soon as schoolchildren return to school at the end of August.

Therefore, September is an appropriate month for an extra bank holiday, he said.

He said mandatory hotel quarantine is "a closed sign" over Ireland, and that it will have "long term consequences" for the economy.

The ITIC also called today for Government to publish a clear aviation plan by the end of the month, stating how and when international travel can recommence.

The loss of international visitors is costing the tourism industry €27m a day, according to the ITIC.

"The Government needs to scrap the ban on non-essential travel and mandatory hotel quarantine and instead adopt the European Commission’s Covid-19 cert which allows intra EU travel for those vaccinated, those with a negative test, or those who have been previously infected," it stated.

"What is urgently needed now is a plan from Government stating how international inbound tourism can recommence," Mr O'Mara Walsh said. 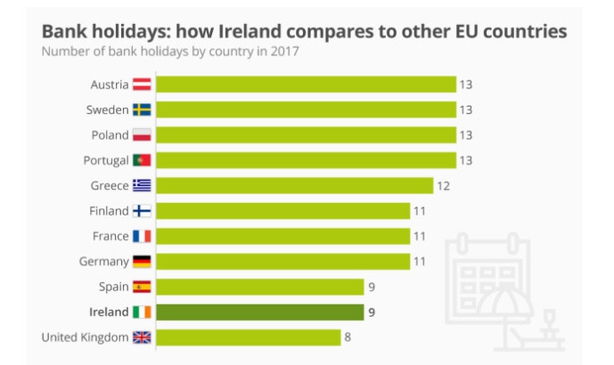 "Ireland should immediately operate the Common Travel Area and allow for free unfettered movement between the UK and Ireland and also should develop a travel corridor with the US, a country whose adult population is expected to be vaccinated this month," he added.