New figures from the Central Statistics Office show that the Covid-19 crisis continues to have a significant impact on the labour market here in April.

The CSO said that the standard measure of Monthly Unemployment stood at 5.8% in April.

But it added that its Covid-19 Adjusted Measure of Unemployment indicates a jobless rate as high as 22.4% if all claimants of the Pandemic Unemployment Payment (PUP) were classified as unemployed.

Most of the economy remained under lockdown in April, with only housebuilding allowed to recommence.

All other building sites reopened this week with retail stores set to follow from Monday and bars and restaurants allowed to serve guests outdoors for the first time this year from early June. Hotels are also due to reopen in June.

The CSO said the monthly unemployment rate in April was 5.8%, unchanged from March and up from 4.7% in April 2020.

The CSO noted that the monthly jobless rate was 5.8% for both men and women.

Today's CSO figures also show that the Covid-19 Adjusted Measure of Unemployment indicates a jobless rate of 21.9% for men and 23.1% for women. 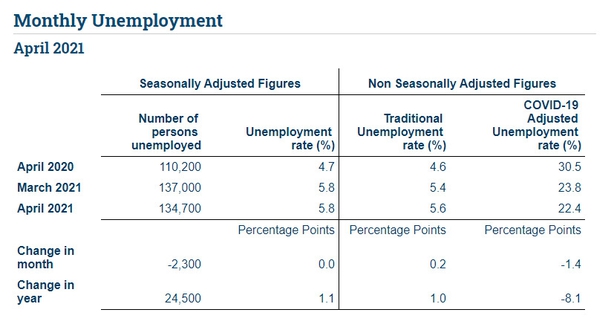 Mr Kennedy noted that areas like construction, retail and personal services have been in deep freeze and finally will get a chance to thaw this summer.

Local economies will hopefully get a boost too from people with pent up savings willing to spend on staycations, he added.

Mr Kennedy said that one area that will be on the minds of the many unemployed young people will be summer work.

He said that traditionally a great way to boost employment among this cohort, it will be interesting to see if figures improve for young people.

"There are 61.8% of those under 25 classed as unemployed under the Covid adjusted measure, albeit this likely overstates true unemployment as receipt of the PUP payment, which is likely to be temporary for many," he said.

"Summer work can also provide the means for young people to transition from school into the labour market, something that cannot be underestimated in terms of professional development," he added.