An Bord Pleanala has given the green light to plans by developer Noel Smyth to construct a 13 storey tower overlooking Dun Laoghaire harbour.

The appeals board has granted permission for the €47.5 million 'fast-track' plan by Mr Smyth’s Fitzwilliam PL Ltd in spite of over 70 local objections lodged against the plan.

The appeals board also granted planning permission for the 102 build-to-rent apartment scheme on the car-park of St Michael’s Hospital at Seafront Quarter, Crofton Rd, Dun Laoghaire despite the strong recommendation by Dun Laoghaire Rathdown County Council to refuse permission.

The council recommended that planning be refused after stating that it "has significant concerns over the proposed height, density, scale and massing of the proposed development".

The council said the proposed height "is excessive and will be visually incongruous in the streetscape and will impact on the urban skyline of Dun Laoghaire".

However, the appeals board granted permission after concluding that the scheme would not seriously injure the residential or visual amenities of the area and would be acceptable in terms of urban design, height and quantum of development. 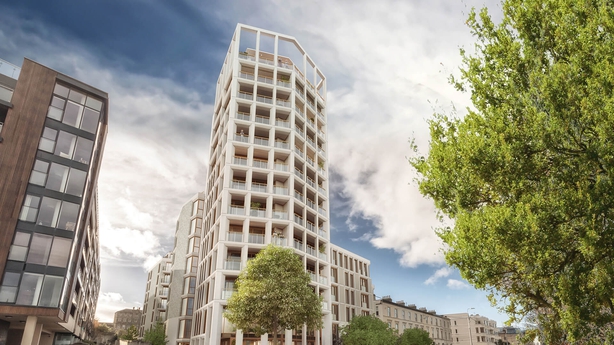 The board also said that it was satisfied that the proposal would not seriously injure the character and setting of the adjacent protected structures.

Documents lodged with the appeals board show that the estimated monthly rent roll from the development totals €204,800.

This is based on the developer’s estimate of a monthly rent of €2,400 for a two bedroom and €1,900 for a one bedroom apartment.

As part of the developer’s Part V requirements, it is to provide 10 of the 102 apartments to Dun Laoghaire Rathdown County Council to rent to people on the council’s housing list.

Those to object to the planned tower included 'Save Our Seafront’ and People Before Profit TD, Richard Boyd Barrett.

‘Save our Seafront’ argued that 13 storey building will destroy the unique skyline at Dun Laoghaire and will take away from the look and feel of Dun Laoghaire.

On behalf of Katherine Aylmer, Roisin Hanley Architects told the appeals board that the scheme will significantly pollute the skyline at night and destroy the amenities of 130 neighbouring residential units.

At pre-planning stage, Dun Laoghaire Rathdown County Council voiced its concerns over the proposed height of the tower after stating that it "would appear to rise above the tower of the County Hall and the spires of St Michael’s and Mariners’ Church".

Consultants for the developers, John Spain & Associates argued that the height of the building is justified as it "will introduce a landmark building which provides a gateway entrance to Dun Laoghaire town centre and helps to define the Seafront Quarter".

He also stated that the proposals will replace a surface car park with a modern apartment development "which provides a high level of amenities to residents".