A new report from the Central Statistics Office finds evidence that Brexit has led to an overall decline in trade between Ireland and the UK in food and drink products and a decline in Irish trade overall.

The report - entitled 'Food and Agriculture: A Value Chain Analysis' - compares exports of food and drink products in January and February 2018 and the same two months this year.

It finds that overall exports of food and drink products has fallen by €101m or 5%.

Most of this decline stems from a reduction of €223m, or 35%, in exports to Great Britain.

The CSO noted that while exports to seven of Ireland's ten largest export markets for food and drink actually went up over the period, the declines in exports to Great Britain were greater.

Great Britain is still Ireland's biggest food and drink export market but its share of those exports has fallen from 33% in 2018 to 23% today. 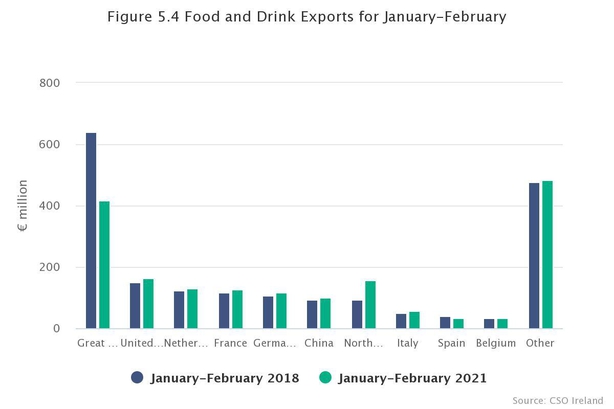 Exports to Northern Ireland increased by €63m, or 67%, over the same period.

Food and drink imports fell by €224m or 18% over the same two year period. The CSO said this is "almost entirely explained" by a reduction of €335m (64%) in imports from Great Britain.

In 2018, Great Britain accounted for 41% of imported food and drink. Today that percentage has fallen to 18%.

Imports of food and drink from Northern Ireland increased by €76m (75%) over the same period.

The CSO noted that Covid-19 may also be a factor in the trading patterns reported, adding that monthly trade figures are more volatile than annual figures. 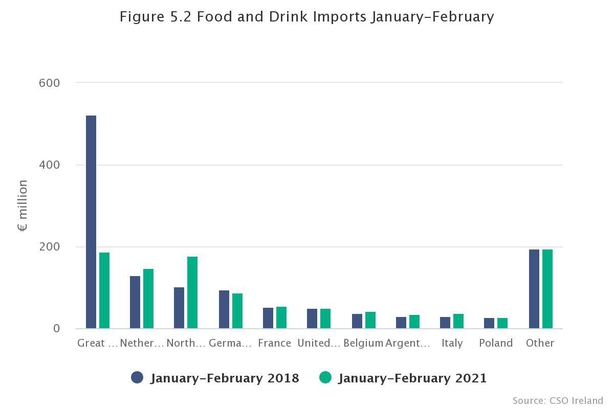 It is also the case that stockpiling occurred in the last few months of 2020 in advance of Brexit which may have dampened trade in January.

"As more data becomes available later in the year, it will become clearer as to whether this is an initial Brexit shock, or if the Irish food and drink value chain is truly moving away from its dependence on Great Britain," senior statistician with the CSO Michael Connolly said.

The report is part of the CSO's Frontier Series which uses new methods of data collection and analysis.

Today's report also delves into the economic value created by the agricultural sector and finds this was worth €8.7 billion in 2018.

Irish agricultural exports, which consists of live animals and animal products, were worth €640m in 2018. Most of this went to the UK.

The vast bulk of the product produced on Irish farms goes on to be further processed in the food industry. The majority is purchased by domestically-owned food and drink companies. 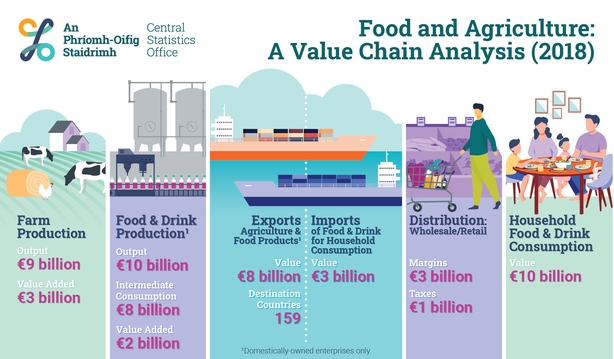 The CSO said the food industry produced €25.7 billion worth of goods in 2018, most of it destined for exports.

Irish companies produced €7.2 billion worth of exports while foreign-owned producers exported €14.6 billion. The balance was either consumed here by households or as agricultural inputs like animal feed.

Foreign-owned food producers here created €7.1 billion in value. €1.1 billion went on an estimated 21,000 employees in Ireland while €5 billion was repatriated in profits.

Domestic producers created €2 billion in value, of which €1.3 billion went on the wages of 32,000 people employed by these firms.

Households consumed €10.5 billion in food and drink products in 2018. €1.2 billion of this was spent on taxes, minus subsidies. €2.8 billion went to the margins of wholesalers and retailers.

Of the remaining €6.5 billion, €3.3 billion went on imports of food and drink, the CSO added.

Inflation is still alive and kicking