UK retail sales jumped last month before a partial lifting of coronavirus restrictions, suggesting an economic rebound is under way.

UK sales volumes leapt by 5.4% in March from February with clothing retailers able to sell online benefiting especially as consumers got ready to venture out after being locked down for much of the past year.

Retailers also reported a rise in purchases of mobility equipment as older people left their homes after their vaccinations.

There was also a jump in sales at garden centres, reflecting the boom in gardening over the past year.

Economists polled by Reuters had expected a much smaller month-on-month increase of 1.5%.

"March's strong rise in retail sales showed that the economy made a fair bit of progress even before non-essential retailers re-opened in April," said Paul Dales, an economist with Capital Economics.

Sales were up 1.6% from February last year, before the pandemic hit, the Office for National Statistics said.

Separate data underscored the huge cost of the UK government's emergency programmes to prop up the economy last year.

The government borrowed £303.1 billion in the 2020/21 financial year, which ended last month, a surge of £246 billion on the previous year and the biggest share of the economy in peacetime.

Finance minister Rishi Sunak last year ramped up spending on jobs and income protection, welfare and the health service and cut taxes as swathes of the economy were closed. 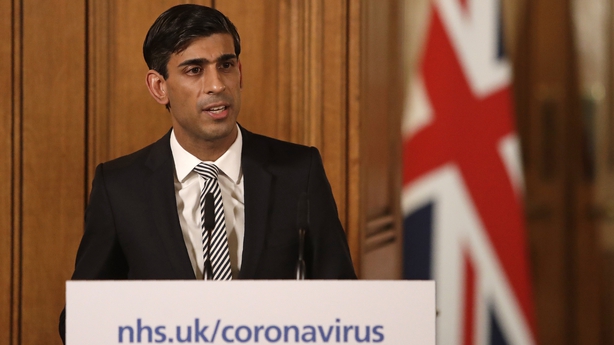 Britain's budget forecaster predicted in early March that overall borrowing would hit £355 billion in 2020/21, but it has said since then it would probably come in a bit lower.

Today's figures do not include £27.2 billion of Covid-19 loan programme write-offs that the forecasters estimate will need to be made.

Samuel Tombs, an economist at Pantheon Macroeconomics, said that forecast was now looking too high, given the prospect of a stronger economic recovery this year.

Economic output in the UK slumped by almost 10% last year, its biggest collapse in more than three centuries, but it is expected to grow by more than 5% in 2021 and 2022, according to the International Monetary Fund.

The Bank of England is waiting to see the extent to which households spend their lockdown savings as it assesses how long it needs to keep its huge stimulus plan in place.

British consumer sentiment hit its highest since the start of the pandemic this month, a survey showed, but the increase was smaller than economists had expected.

The ONS said retail sales were up 7.2% compared with March 2020 when the pandemic was spreading in most Western economies.

It also noted that the share of shopping done online slipped from a record high in February to 34.7% in March.