Figures published the Central Statistics Office today give a provisional breakdown of the €13.1 billion spent by the Government last year to tackle Covid-19.

Today's figures show that €100m was spent on "primary care and repatriation", €600m on restart grants for businesses.

€200m was spent on the Covid Restrictions Support Scheme (CRSS), €100m on other enterprise support schemes, €800m on IT services and €500m categorised as 'other'.

The Government Finance Statistics confirm a deficit of €18.4 billion in the public finances in 2020. This is equal to 5% of GDP.

Overall Government revenues were down 3.9% with tax revenues down €2.5 billion compared to 2019.

Borrowing was up €14 billion to bring the Gross General Government debt to €218.2 billion, the CSO figures show. 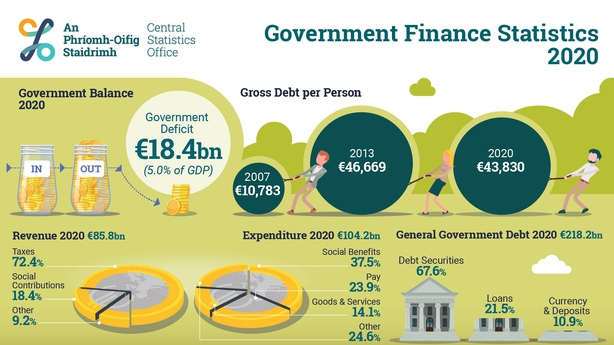 Borrowing was up €14 billion to bring the Gross General Government debt to €218.2 billion, the CSO figures show.

The topic that rattled Davos - is globalisation dead?