The price of residential property nationally rose by 3% in February, according to the latest figures from the Central Statistics Office.

This compares to an increase of 2.6% in January and a 1% increase in the 12 months to February of last year.

Prices were slower to rise in Dublin with an increase of 1.2%. Houses in the capital rose by 1.2% while apartments rose by 0.9%.

The price of new homes, which is measured on a quarterly basis, showed an increase of 2% in the fourth quarter of 2020 compared to the same period in 2019.

A total of 3,205 properties were sold in February - a 7.4% increase on last year but an 8% decline on January. Second-hand houses made up 85% of properties sold, with new homes just over 15%.

First time buyers make up a third of purchasers, while 53.2% were movers and 13.5% were non-occupiers or investors. 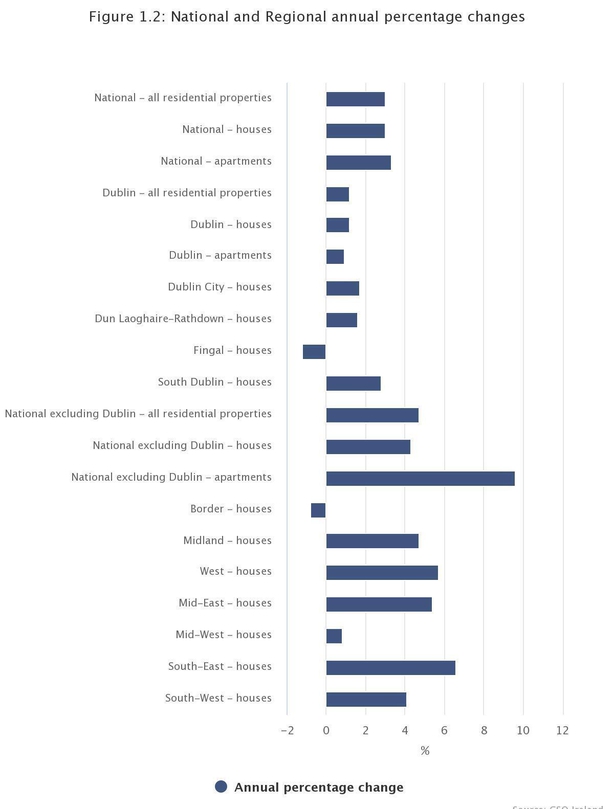 Outside Dublin, it is Greystones in Co Wicklow at €355,000. The postcode with the lowest median price is Castlerea, Co Roscommon with prices of €85,000.

The CSO said that home prices nationally have increased by 88.5% from their trough in early 2013.

Dublin residential property prices have risen 95.3% from their February 2012 low and prices in the rest of Ireland are 89.8% higher than at the trough, which was in May 2013.

Dermot O'Leary, Chief Economist at Goodbody said the figures suggests there has been a shift in locational preferences due to the pandemic.

"The largest increase in the past three months has been in the Midlands.

"The pandemic has clearly brought about a dramatic shift in the way we live and work, with Ireland seeing the largest increase in people at home and largest decrease in people in workplaces in Europe according to the latest Google data.

"This shift will continue to have profound implications beyond the pandemic for housing, transport and the labour market," he said.