The International Monetary Fund has said Europe's economy should rebound this year but recovery across the region remains uneven.

The IMF is also calling for a "new social contract" to address inequality.

In its Regional Economic Outlook for Europe published today, the IMF forecasts that growth this year will be 4.5%.

This is slightly less - 0.2% - than its forecast made in October last year and is a result of more lockdowns from new waves of corona virus.

It describes vaccines as a "gamechanger", but warns the pace of progress in Europe is "still moderate" and varies significantly across countries.

Industrial production is back to pre-pandemic levels but service activity is still shrinking with economies like Croatia, Italy and Spain badly affected, the IMF said.

It describes financial conditions as "highly accommodative" thanks to the continuing actions of central banks.

The announcement of the US fiscal stimulus has so far had limited spillover to Europe, it added.

It noted that job retention schemes were run in 40 different countries, which protected 68 million jobs.

Business support schemes also saw the number of corporate bankruptcies across the continent actually decline in 2020.

The IMF said that virus mutations and delays to vaccine programmes are the biggest threats to growth.

It urged governments to continue to support jobs and economic recovery, adding that government spending needs to play an increasingly larger role. 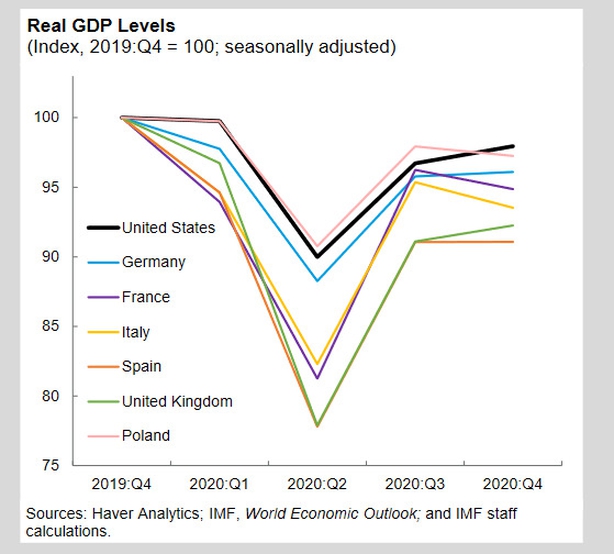 The IMF called for a "…new social contract that will help cope with disruptive technological changes and accelerating automation."

It also said the issue of inequality must be addressed.