New figures from the Central Statistics Office show that the volume of retail sales jumped by 13.9% in February compared to January even though the country remained under strict lockdown restrictions.

On an annual basis, retail sales volumes were only 3.2% lower in February compared with the same time last year when the economy was fully open.

Retail sales had slumped by 21.8% in January on a monthly basis.

The CSO noted that when car sales are excluded, the volume of retail sales increased by 2.5% in February over the previous month and decreased by 3.9% when compared with February last year.

The largest monthly increases were in hardware, paints and glass, with sales rising by 25.5%. Furniture and lighting sales increased by 23.6% and electrical goods grew by 23.2%.

But this was offset by a 12.8% fall in bars sales, while sales in Department stores were down 1.8%.

Today's figures show that compared with February 2020, the volume of retail sales slumped over 91% in bars last month, while clothing, footwear and textiles sales sank by 63.6%.

Sales of books, newspapers and stationery were down 55%, while sales in Department Stores fell 45.2%. Meanwhile, fuel sales slowed down by 20.4%, while furniture and lighting sales fell by 17%. 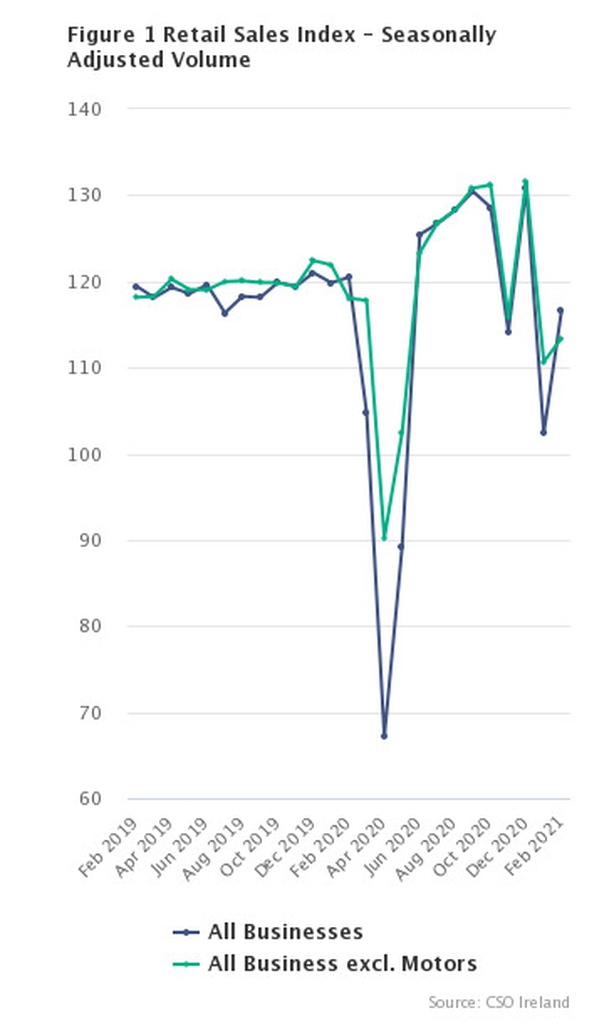 But sales of electrical goods were up 33.5%, while hardware, paints and glass sales rose by and sales of food, beverages and tobacco sales increased by 24%.

Other Retail Sales - which includes sales of  carpets, rugs, wall and floor coverings, music and video recordings, games and toys, flowers, plants, seeds, fertilisers, pet animals and pet food and jewellery - were up 16.8% last month, while sales in supermarkets increased by 11.2%.

The much lower annual drop in February suggested consumers began behaving in a manner similar to the second, less severe shutdown last November, rather than the more damaging initial lockdown a year ago.

Retail sales fell by 4% year-on-year in November compared to record falls of 44% and 25% in April and May.

"Similar to what we would have seen in the second lockdown relative to the first, consumers are adapting to life under lockdown," said Dermot O'Leary, chief economist at Goodbody Stockbrokers.

"It's obviously still down year-on-year but in the context of the lockdown, it's probably not that bad a result," Dermot O'Leary said.

Mr O'Leary said a shift in spending showed the strength of the underlying Irish economy, that when consumers were unable to shop in one retail outlet, they spent their money elsewhere.

The Government is set to only slightly ease the tough nationwide restrictions from next week, with non-essential retail likely to remain closed until at least the middle of May.