A shift away from the UK as a destination for European job seekers post-Brexit is manifesting in increased interest in certain categories of Irish jobs, according to research from online recruitment company Indeed.

Under the UK's new immigration regime, which ends freedom of movement and requires applicants to meet certain criteria, European workers are finding it harder to obtain work visas in Britain.

According to Indeed's figures, there has been increased interest in particular sectors in Ireland from European based jobseekers since the start of 2021.

One area where there has been particular interest is the category of Media and Communications, which includes roles such as content moderators and digital designers as well as other Information and Communication Technology roles.

"The share of clicks on jobs in this category from jobseekers located in the rest of the EU has risen by 3.4 percentage points compared with the same period one year ago.

"By contrast, the UK has seen a slight decline of 0.2 percentage points," Jack Kennedy, economist with Indeed noted.

While Ireland has been seeing enhanced jobseeker activity in certain sectors, overall the level of interest from EU jobseekers remains the same at 1.8% of all cross-border searches.

In contrast, the UK has seen its share of cross-border searches from the EU decline from 18% to 13%. 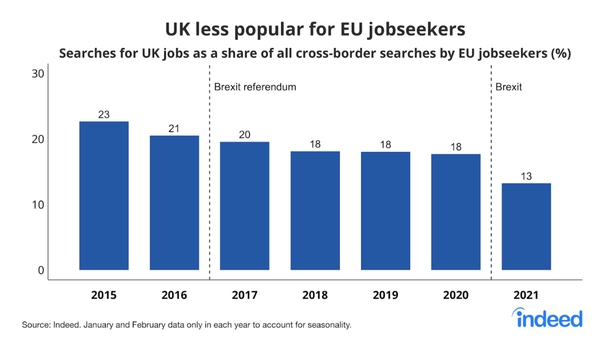 Overall job postings on Indeed's UK site remain down over a third on the pre-pandemic baseline on February 1, 2020 compared to Ireland's 24%.

However, that situation could change as the rollout of vaccines in the UK is on track and ahead of Ireland.

"The faster pace of the UK vaccination programme may see its labour market recover quicker in the coming months," Jack Kennedy said.

"Brexit was a somewhat overlooked event in an extremely tumultuous year, although it has potential to have even longer lasting effects on the Irish labour market. With the UK's migration policy pivoting post-Brexit, Ireland may stand to benefit," he concluded.