February saw another steep contraction in construction activity here due to the coronavirus lockdown restrictions.

Ulster Bank's Construction Purchasing Managers' index remained well below the 50 no-change mark in February, despite rising to 27 from 21.2 in January.

A reading above 50 signal an increase in activity on the previous month and readings below 50 signal a decrease.

The three monitored categories of construction - housing, civil engineering and commercial - all continued to record sharp contractions in activity. However housing and commercial work fell at softer rates than at the start of the year.

Ulster Bank said that while the pace of decline was not quite as severe last month as in January, the considerable weakness in the February results clearly indicates that the pandemic-related restrictions continued to weigh heavily on activity patterns and staffing levels across the sector.

It noted that the New Orders index remained firmly in contraction territory in February.

This showed that activity is likely to remain under significant pressure in the near-term amid the ongoing restrictions which will continue to depress activity in March.

"However, despite the extent of the current challenges facing the sector, the February results were also notable for a sizeable pick up in confidence about the outlook further ahead," Ulster Bank's chief economist Simon Barry said.

"Sentiment picked up to its highest level in twelve months as almost half of surveyed firms anticipate an expansion in activity over the year ahead, with confidence bolstered by expectations for a release of pent-up demand as headwinds from the pandemic fade," the economist added. 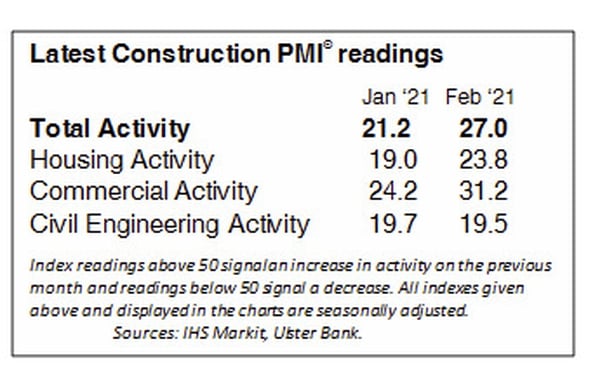 Employment decreased for the second month in a row and at a broadly similar pace to that seen in January. This was also the case with input buying, which fell substantially, Ulster Bank said.

Those firms that did purchase inputs during the month were faced with delivery delays and rising prices, today's survey shows.

It also reveals that suppliers' delivery times lengthened to a slightly lesser extent than January's survey record, but one that was considerable nonetheless.

Brexit was the main factor behind the delivery delays, while there were also some mentions of supply-chain disruption due to the pandemic.

Meanwhile, supply issues and Brexit also combined to cause a sharper increase in input costs, with the rate of inflation the fastest in 23 months.