The economy grew by 3.4% last year when measured by GDP, according to preliminary figures from the Central Statistic Office today.

However, a measure of domestic activity which strips out the impact of multinationals showed that the economy shrank by 5.4% last year.

The divergent fortunes of the domestic economy and the multinational sector are on clear display in these first official growth figures for 2020.

Overall, when measured by GDP, Ireland was the only economy in Europe to have grown last year by 3.4%.

But when domestic activity is measured, modified domestic demand fell by 5.4% - the fall is in the mid range of European economies.

The Covid-19 pandemic clearly had an impact throughout the year.

Economic activity fell sharply during the three months around the first lockdown, before staging a robust recovery and falling - but less sharply - again during the final three months of the year.

Among hardest hit sectors were transport, hotels and restaurants which were down 16.7%. Arts and entertainment were down 54.4% while Construction shrank by 12.7%.

But industry, which is dominated by multinationals, grew by 15.2%, while the information and communication sector grew by 14.3%.

The CSO said that multinational sectors grew by 18.2% while domestic sectors of the economy fell by 9.5%. 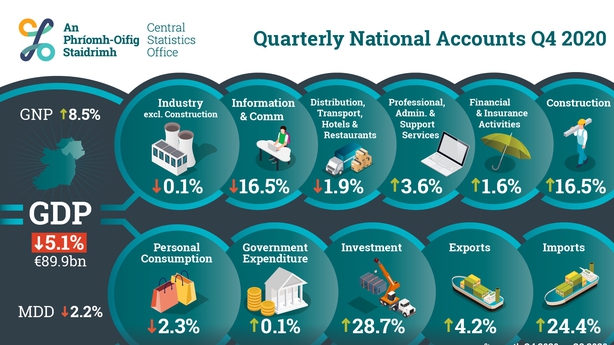 Personal consumption was down 9% over the course of the year. Again, this fell heavily by 19.1% in the second quarter before bouncing back by 20.9% in the third quarter and falling once more by 2.3% in the last three months of the year.

Today's figures show that GDP rose by 1.5% year-on-year in the fourth quarter, driven by a brief reopening of the economy in December.

It was down 5.1% quarter-on-quarter compared to the three months to September, when businesses were largely out of lockdown.

Commenting on today's figures, Minster for Finance Paschal Donohoe said that GDP growth of 3.4% for 2020 as a whole is "remarkable" both in an international context and compared with expectations this time last year as the coronavirus pandemic started.

The Minister said it was entirely a result of the growth in exports, which rose by 6.25% despite a sharp decline in world demand.

"While 2020 was a challenging year for indigenous exports, with food and beverage exports suffering a decline, the pharma and ICT sectors recorded extraordinary export growth, driven by blockbuster immunological drugs, Covid related products, and the shift to home-working," he added.

But the Finance Minister said that GDP is not the most accurate measures of what is going on in the economy and to get an overall sense of what is happening on the ground, he focuses on three key figures.

He said the domestic economy, as measured by MDD, contracted sharply, falling by 5.5 last year, a figure much closer to the typical fall across advanced economies.

Household consumption also fell by 9% last year as the combined impact of a collapse in private consumption as a result of restrictions and extraordinary income supports by the State led to a near €15 billion increase in household deposits last year.

And despite the wide-scale closure of the construction sector in the spring, Mr Donohoe said he was encouraged that the overall fall in house-building was considerably less than expected with a 2% decline over the course of the year.

Overall almost 20,700 housing units were delivered last year, down by around 400 on the previous year, he noted. 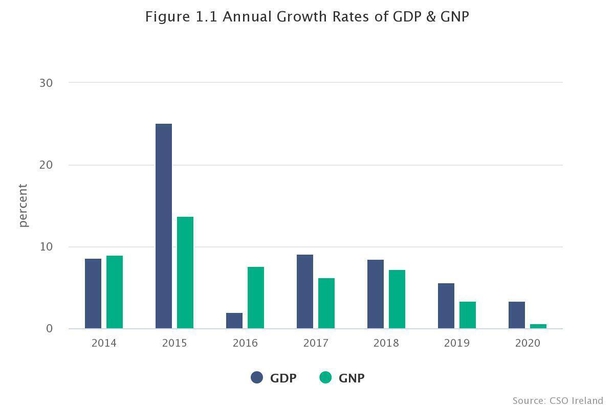 Paschal Donohoe also said that he expects a further contraction of the domestic economy in the first quarter of 2021 due to Level 5 restrictions, although not to the same extent as we saw last Spring.

"For instance while retail sales in January were down 20% on December, this compares to a 35% decline in April last year," Mr Donohoe said.

"Similarly there are roughly 130,000 less people on the PUP this week than at the peak in early May. Indeed we saw modest declines in the numbers on the PUP for the last three weeks and I am hopeful of continued declines in the weeks ahead," he added.

The National Accounts, published by the CSO today, also contains new data comparing changes in what people earned across different sectors. This is based on information garnered from Revenue's PAYE system.

Overall, it shows total compensation of employees fell marginally, by 0.1% last year compared to 2019. But there was considerable variation across sectors.

The pay bill for people working in transport, hotels and restaurants fell by 11.3%. Arts and entertainment fell by 15.1%.

But information and communication was up 8.9%, while Public administration, education and health rose by 5.5%.

Ibec said that export growth of 6.2% showed the strength of the underlying business model, despite testing international conditions.

On the other hand, the impact of Covid-19 on associated health restrictions was clear in the fall of 9% in consumer spending.

Ibec's chief economist Gerard Brady said the CSO figures show both the significant losses facing the domestic sectors and the strength of the underlying business model.

"There is no doubt that we face some increasingly challenging economic circumstances. As we speak, there are close to half a million people unemployed and large sectors of our experience economy face extremely challenging operating environments," Gerard Brady said.

The economist said that continued and enhanced support from Government for the worst impacted sectors will be needed for much of 2021.

"However, there is now real hope for the second half of 2021 that as vaccine rollout takes place, and a robust export performance continues. This will help release record household savings, bring down unemployment, and give the economic recovery a much needed shot in the arm," he added.

Covid-19 having 'profound' impact on SMEs