Ryanair hopes to fly up to 70% of 2019 passenger numbers this summer, thanks to Covid-19 vaccines and more coronavirus testing, group CEO Michael O'Leary said.

This is provided travellers who have been vaccinated or had negative tests are made exempt from quarantine rules, he added.

Speaking before a British parliamentary committee today, Ryanair Group chief executive Michael O'Leary also warned that a mooted government vaccine passport is unlikely to be ready in time for the peak holiday season.

"We would be hopeful that we could fly maybe 60, 70% of our normal traffic volumes during the peak summer months - June, July, August and September," he said.

"That's about as optimistic as its going to get," he added.

In addition to widespread vaccinations, Michael O'Leary forecast that pre-departure PCR tests, which can cost more than €100, would fall in price by the summer, further opening up Europe and Britain for travel.

The UK government's ban on non-essential international travel to and from England will remain until at least May 17, but a UK taskforce is expected to provide more clarity for holidaymakers on April 12, when it is due to report on proposals for how to restart international travel.

Micheal O'Leary, however, called for swifter action to reassure holidaymakers.

"We don't need a taskforce, we just need action," he said. "The real challenge is timing here - we need to give them the clarity to book their summer holidays."

At the hearing of parliament's transport committee, Mr O'Leary repeatedly called on the government to scrap Air Passenger Duty for one to two years, saying removal of the tax on passengers would be the single most effective measure to stimulate the market.

Ryanair expects to fly more than 27 million people in the year to the end of March and Mr O'Leary said the consensus forecast for the company's financial year was for a loss of about €850m. 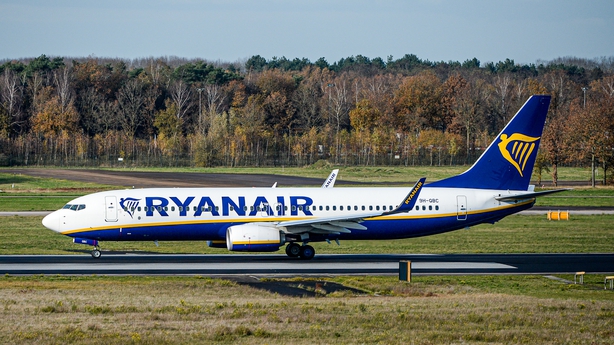 He said the airline would then hope to operate at close to break-even for the following financial year to March 31, 2022.

Meanwhile, Ryanair said it has joined the "Fuelling Flight Initiative" as part of its commitment to supporting Sustainable Aviation Fuels (SAFs) as an essential element to achieve net-zero carbon emissions in the aviation industry.

The initiative provides recommendations on the sustainability aspects of the EU's policy design to support SAFs.

Together with environmental groups, airlines and research organisations, the group convenes to reach consensus on the necessary policies for the transition towards carbon neutral flying.

Ryanair's Director of Sustainability, Tom Fowler, said that Sustainable Aviation Fuels are a key component of airlines' efforts on the road to carbon-neutrality.

"A transparent and future-proof regulatory framework for SAFs can support and equip airlines in their fight against climate change, and we are proud to be part of this initiative," Mr Fowler added.