New Central Statistics Office figures show that the volume of retail sales decreased by 21.8% in January compared to December on a seasonally adjusted basis as the country went into another Covid-19 lockdown.

On an annual basis, retail volumes were 14.1% lower in January 2021 compared with the same month last year.

The volume of retail sales fell across all categories, with the exception of electrical goods which increased by 1.3% compared with December of the previous year.

The CSO said the biggest fall in sales in the month were seen in bars, which sank by 75.1%.

Clothing, Footwear & Textiles sales slumped by 72.2%, while Furniture & Lighting sales were down 49%.

Sales of Books, Newspapers & Stationery were 47.9% lower in January compared to December, while Department Stores sales fell by 36.8%.

Compared with January last year, the CSO said the volume of retail sales was lower 90.7% in bars, while Clothing, Footwear & Textiles sales were 68.4% lower.

Sales of Books, Newspapers & Stationery were down 52.9%, while Department Stores sales fell by 39.2%.

The Central Statistics Office said its figures show that the Covid-19 pandemic and the restrictions imposed as a result had a significant impact on the retail sector last year.

2020 saw the biggest seasonally adjusted monthly retail sales decrease in April, with a drop of 35.7%, during the country's first lockdown. 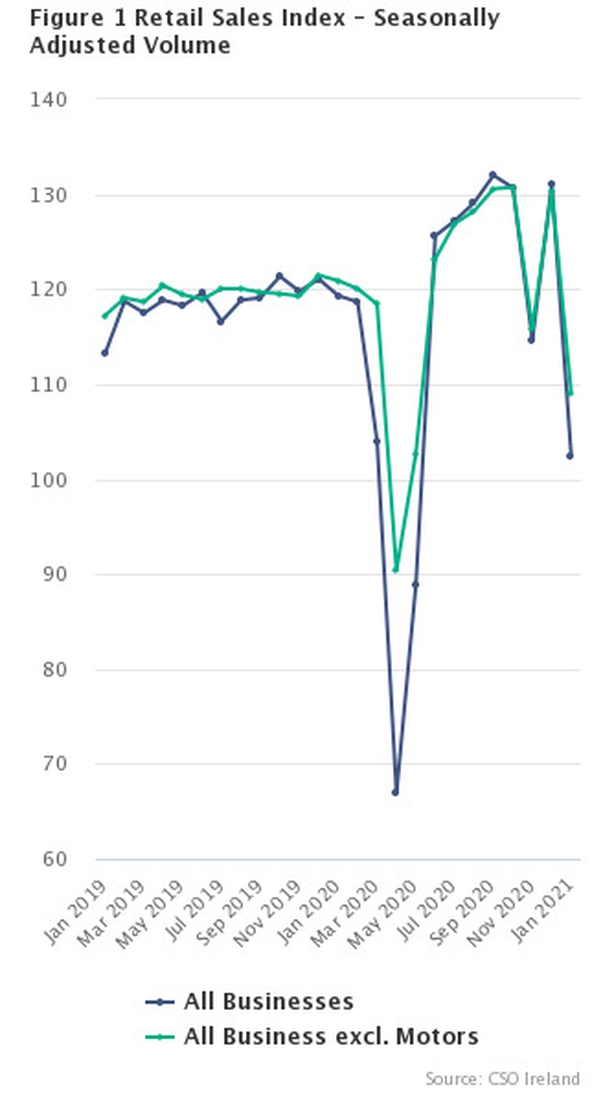 The CSO said the percentage of online sales in Irish companies remained stable since records began in 2018 at between 2.5% to 4% prior to the impact of Covid-19. But in April, that figure rose to 15.3%.

It also said that while overall retail sales fell in April, the closure of non-essential shops and outlets saw many consumers move online to purchase goods. As traditional shopping re-opened, the proportion of transactions online fell, it noted.