New figures from the Central Statistics Office figures show that consumer prices posted an annual fall of 0.2% in January compared to a drop of 1% a month earlier.

This marked the slowest rate of year-on-year decline in nine months.

On a monthly basis, the CSO said that consumer prices rose by 0.1% in January from December.

Consumer prices have dropped on an annual basis since Covid-19 restrictions were first introduced in March but they have been rising on a monthly basis since November.

Today's CSO figures show that transport costs decreased by 2.3% due to lower prices for diesel and petrol and a reduction in air fares.

But this decrease was partially offset by higher prices for cars and an increase in the cost of services of personal transport equipment.

Clothing and footwear costs were down 3.4% due to sales, while good and non-alcoholic beverage prices fell due to lower prices across a range of products such as meat, jam, honey, chocolate and confectionery, vegetables and fruit.

January also saw lower prices for home heating oil, lower rents and a fall in the cost of natural gas. These reductions were partially offset by an increase in the cost of electricity and higher mortgage interest repayments, the CSO said.

The CSO noted that health costs increased last month, mainly as a result of a rise in the cost of medical and dental services. 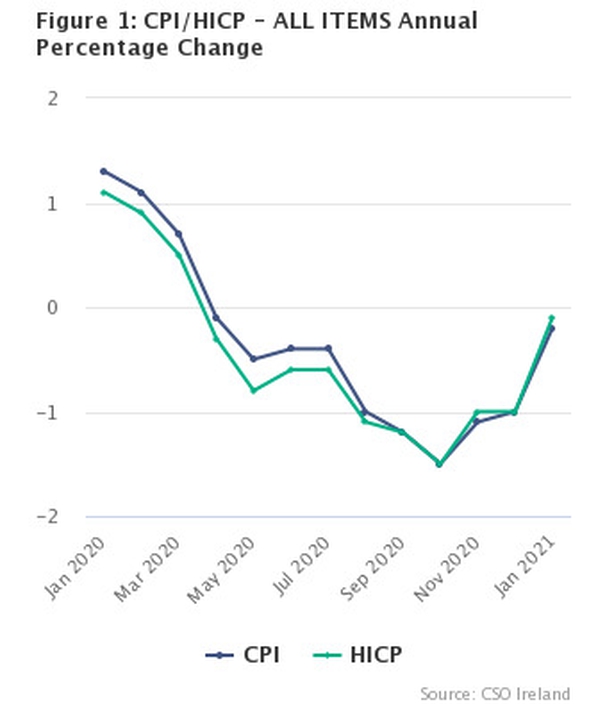 Prices for alcohol and tobacco also rose mainly due to an increase in the cost of tobacco products and higher prices for spirits and wine sold in supermarkets and off licences.