A survey by the Central Statistics Office has found that 64.7% of those in employment have some form of supplementary pension coverage, up 5% compared to 2019.

The CSO survey was conducted between July and September last year.

The CSO noted, however, that it surveyed only those in employment so many who may have lost their jobs due to Covid restrictions would not have been captured.

The survey found that the percentage of workers with a supplementary pension increased with age.

Of the workers with no pension arrangements, 52.2% said their employer does not offer a pension scheme. 35.3% cited "affordability" and 37% said they "never got around to it".

57.6% of those without a supplementary pension said they expected to rely on the State pension for income after retirement. 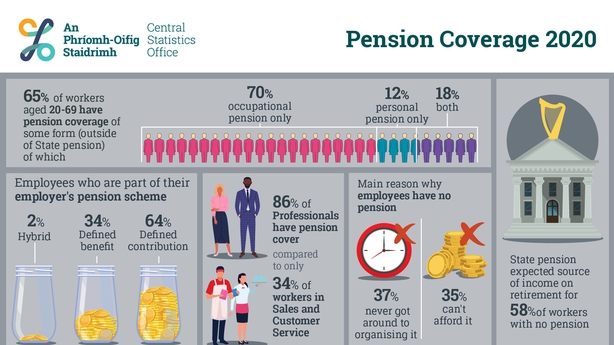 The survey also shows a big difference between pension cover across different sectors of the economy.

Professionals were highest at 86.4%, the CSO added.