While the volume of cars on Irish roads has been increasing slowly during January, overall volumes remain low following the introduction of Level 5 restrictions, new figures from the Central Statistics Office show.

The CSO said that in the week beginning January 24, car traffic volumes were 55.2% lower in regional locations and 53% lower in Dublin compared with the same week last year.

HGV traffic volumes in January remained lower than the same month last year, despite being on a par or higher during much of 2020.

Today's figures show that HGV traffic volumes were 6.9% lower in regional locations and 15.9% lower in Dublin locations when compared with the same time last year. 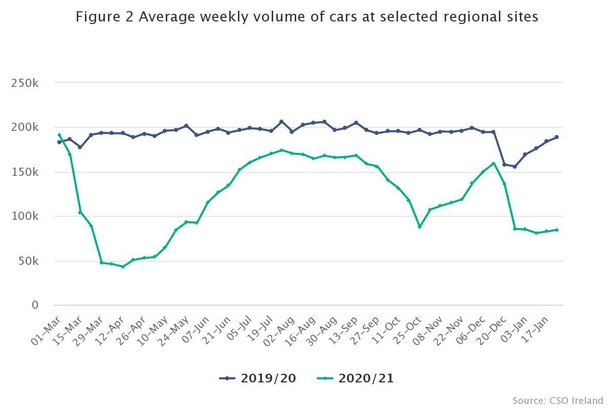 The CSO said the number of passenger journeys on public transport continued to see dramatic falls since the start of the Covod-19 crisis with journeys by rail most severely affected.

Despite some recovery in the lead-up to Christmas, the return to Level 5 restrictions has seen public transport volumes fall back to just 21.7% of volumes seen in early March.

The CSO also noted that the volume of bikes being used during off-peak hours was 27% lower in January of this year compared to the same month last year.

Covid-19 also continued to have a big impact on air passenger numbers with the number of passengers travelling through Dublin, Cork, Shannon, Knock and Kerry airports in 2020 78.2% lower than 2019.

However, the number of passengers travelling through Dublin airport in December was up by 114,482, an increase of almost 70% on November.