The Covid-adjusted rate of unemployment rose to 25% in January, up from 19.4% in December, according to the latest figures from the Central Statistics Office.

Restrictions, including the closure of shops and restaurants and a ban on travel and home visits, were dropped for most of December but reimposed late in the month after a surge in infections.

The CSO said that the traditional measure of unemployment remained unchanged at 5.8% last month.

The CSO also cited additional information from the Department of Social Protection which shows that "at least" 8% of those receiving the PUP are in full time education.

Those in full time education would not normally be eligible for unemployment assistance or benefit.

The CSO cautions that those in full time education who are in receipt of the PUP would therefore not normally be counted as "unemployed". 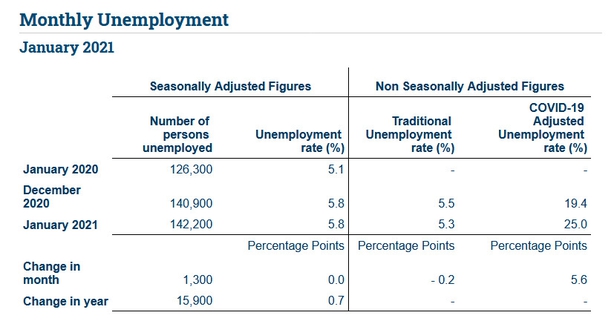 On a macro level, the economist said it will be interesting to see how many of the changes Covid has brought are here to stay.

"It's possible we will see the job profile in this industry transform as it moves from bricks and mortar to more online selling. We already saw a rise in warehouse and delivery jobs last year, it now looks like this could be less of a temporary trend and more of a cultural shift," he added.

Mr Kennedy also said that Brexit may bring lasting change to the shape of the labour market.

"Industries highly sensitive to supply chain issues will likely continue to transform and adapt in order to circumvent these challenges, bringing new opportunities for the labour market,"  he added.