Ryanair said it may lose close to €1 billion in its current financial year, by far its worst ever performance, but Europe's largest low-cost carrier said the crisis would create significant growth opportunities.

The airline said it expects to post a loss of between €850-950m in its current financial year, which ends on March 31.

"Covid-19 continues to wreak havoc across the industry," the airline said in a statement. "FY21 will continue to be the most challenging year in Ryanair's 35 year history."

Covid-19 restrictions cut Ryanair passenger numbers by 78% in the last three months of the year, the third quarter of its financial calendar, pushing it to a quarterly loss of €306m.

That compares with a loss of €300m forecast in a company poll of analysts and also compares to an €88m profit in the same period of 2019.

Ryanair posted a fall of 82% in revenue in the final three months of 2020, compared with falls of 88% at rivals EasyJet and 77% at Wizz, which both reported results last week.

Ryanair is widely seen as one of the best-placed airlines in the world to weather the Covid-19 crisis due to its large cash balance and lack of long-haul and business-class.

The airline reaffirmed its forecast it would fly between 26 million and 30 million passengers in the year to the end of March compared with 149 million in its previous financial year.

But it warned there was "more risk towards the lower end of the range."

Ryanair in December ordered an additional 75 Boeing MAX jets in what was the largest order since the plane was grounded in early 2019 following two fatal crashes. The jet was cleared in January to resume flying in the European Union.

Ryanair said it expects to have taken delivery of at least 24 of the 210 it has on order in time for its peak summer season, down from an earlier forecast of up to 30.

The group chief executive of Ryanair said he expects a dramatic recovery this Summer on the back of a successful vaccine rollout in the UK where 50% of the population should be vaccinated by the end of March.

Michael O'Leary said the airline accepts that Easter this year will be a "write off" because of delays in the vaccination programme but said that millions of people should be travelling to the beaches of Europe in July, August and September.

Speaking on Morning Ireland, Mr O'Leary that the vast majority of those getting sick and dying as a result of Covid-19 are over 65 and there will be a dramatic reduction in deaths and hospitalisations once everyone over the age of 50 has received a vaccine.

He also called on the Government and NPHET to "get its finger out", saying that vaccination is the way out of this situation. 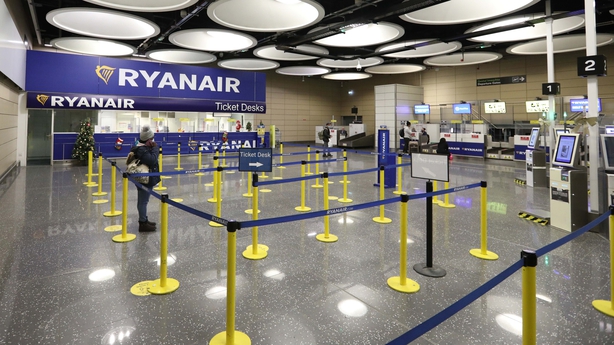 Mr O'Leary also said that the airline is buying more low cost aircraft and lowering the cost of flights in order to carry more people on holidays.

He said that every customer who has requested a refund has received it.

Mr O'Leary said he expects a very strong recovery at Dublin and Shannon airports but that the recovery at Cork will be delayed because of the high cost of operation there.

The Ryanair CEO said that airlines need much lower costs in order to restore Irish tourism and that Irish tourism will not be restored by staycations.

He added that most of the international travel that NPHET worries about is "coming across the border with the North of Ireland' and not coming on non-existent flights at Dublin airport.

Pat Dawson, CEO of the Irish Travel Agents Association, said Ryanair's claim that everyone has been refunded is "not true".

Speaking on RTÉ's News at One, Mr. Dawson said "one small travel agent is Munster is owed €60,000" and has paid the money directly to its customers, even though he has not received the money from Ryanair yet.

He said another travel agent, who specialises in school tours, is waiting for half a million euro worth of refunds.

According to Mr Dawson, these payments were made directly on the Ryanair website and paid by credit cards and he said "there's no reason to say there's a delay."