It has been framed by the media and observers as a Main Street versus Wall Street struggle.

The little man taking on the Titans of the investment industry - and actually winning.

The GameStop debacle that has been playing out over the last week has been an extraordinary spectacle for a multitude of reasons.

If you haven't been following it, in its most basic terms this is what has happened.

Many traders in large hedge funds make their money by borrowing stock from other investors.

They then sell those shares and wait in the hope and expectation that the share price will fall, at which point they buy the shares back, return them to their original owner and pocket the profit.

It is a process known as short selling, and while looked down upon by some because it involves profiteering on the back of struggling companies, it is nevertheless perfectly legal and an established facet of a functioning market. GameStop, the flagging US-based computer game retail chain, had for some time been targeted by short sellers who took a view that its outdated retail model would in time lead to a decline in its valuation.

But in recent months, and in particular the last few weeks, many of the now five million largely anonymous individual amateur armchair investors who hang out on the popular Reddit WallStreetBets chat room decided to intervene.

Using low-cost trading apps such as Robinhood and TD Ameritrade, this citizen army began buying GameStop stock, or taking options to buy it, bidding the price up through the roof.

On Thursday, it peaked at $483, before plummeting to $126 as the brakes were put on by some of the trading apps who controversially limited trading activity and by regulators, before spiking again to $325 at the close of trade yesterday.

The stratospheric jump in the GameStop stock caused the short sellers who had taken a position in the shares to have to buy further at a higher level to try to mitigate their losses or close their positions out.

As well as providing a profitable exit for some of the WallStreetBets activists, this also crystallised billions of dollars in losses for the short sellers, driving a number of the firms into precarious financial positions.

One such fund, Melvin Capital Management for example, was forced to seek a $2bn bailout off the back of its losses. 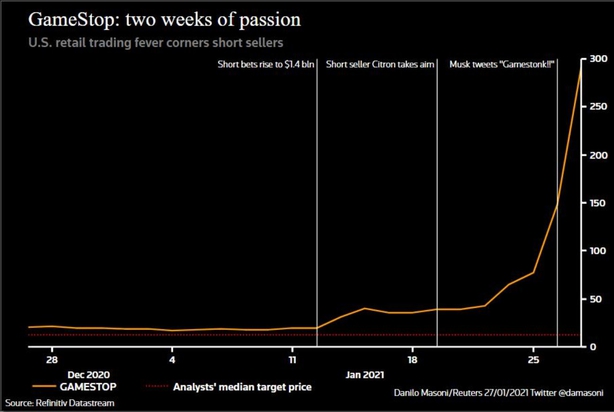 As the fever rose, contagion quickly began to spread to other companies similar in profile to GameStop whose shares had also been shorted by hedge funds, like Blackberry, Nokia and movie theatre owner AMC Entertainment.

It then started to impact companies and markets outside the US, as already jittery investors wondered whether the imposition of massive losses on funds that form a substantial part of the market could cause a bigger house of cards to come tumbling down.

Flabbergasted Wall Street traders had rarely seen anything like it, as their tight controlling grip on the market was ripped apart by the power of many individuals acting as one.

Regulators looked on perplexed too, wondering how traditional market economics and instruments were being upended by an investor "mob" as they were characterised by some.

The motivations of these "Davids", seems to have been mixed. Certainly teaching the greedy and obscenely rich Goliaths of the investment establishment a lesson was high up there for some.

It seems to have worked, with S3 Partners estimating that short-sellers have lost $20bn this month in GameStop alone because of the so-called "short-squeeze" fight back by ordinary-Joe investors.

Others seemed to want to back GameStop and the other companies for reasons of sentimentality, believing they still have something to offer and had been treated harshly by market vultures.

More jumped on the bandwagon when they were either swept up by the wave of madness or convinced to row in by others.

Some of course got involved when they saw an opportunity to make money.

And make money they did, with reports emerging of a few turning holdings worth a few thousand dollars into tens of millions in a matter of days.

But, notwithstanding the compelling narrative of the ordinary man overcoming the establishment, there will ultimately be many people who will eventually end up financially burned.

For all the stories of people making millions in a matter of days, there were also tales of investors piling life savings into the stocks in question, believing they could not lose.

However, when the euphoria runs dry and the froth settles, the reality is that many of these companies do not appear to have the fundamentals to justify their current stratospheric valuations. 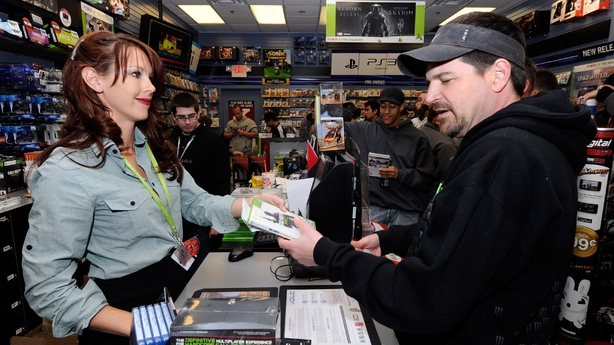 Their share prices will therefore likely fall as rapidly as they rose, leaving many (not just the hedge funds) nursing significant losses.

Worse still, if too many firms become embroiled in this fantasy, it could have a much wider destabilising impact.

It all goes to underline the vulnerability of the markets, particularly at a time when many analysts are already calling a bubble after months of record gains across the board.

Ironically, many commentators are drawing parallels with the dotcom bust of the early noughties.

Ironic because the role of technology itself in the events of the past fortnight have also come sharply into focus.

The internet has brought so many incredible innovations, not least in the investment sphere, providing easy cheap access to trading and financial information to anyone who has a few euro to invest and a smartphone app.

Arguably there is also something inherently democratic about the fact that a large group of individual armchair investors can now move markets by working together from their sofas.

But given our dependence on markets for the creation and storing of wealth, the movement of money, the provision of pensions, the underpinning of the banking and finance systems, and so much more, it is pretty concerning just how open they now are to random manipulation.

Sure, big investors have for generations been able to influence markets through their actions, their words and their private deal making, often in ways that have crossed the line of legality.

What the GameStop case has demonstrated though is that with the power of trading now at everyone’s fingertips, it’s now far harder for regulators to control.

When those pulling the strings hide behind anonymous user monikers on popular social media platforms, how can you know what their motivations are, who they are working with and what they are doing offline to influence market trends?

Add to this the role played by big data in providing market moving information, as well as the automatic trading algorithms that most big firms now use to execute automatic trades at lightning speed, and you begin to see just how vulnerable markets are to manipulation and influence.

As Paul Somerville of Somerville Advisory Markets put it on RTÉ’s Morning Ireland on Friday, this is now all about the "plumbing of the financial system and how it actually operates."

Long gone are the days when the fundamentals of balance sheets, profit or losses, market data, leadership, economic sentiment and share prices were the sole determinant of what moved markets.

Perhaps the best advice is to steer well clear unless you really know what you are doing and have the resources to lose in the first place.

But in reality, whether we care to acknowledge it or not, the financial and economic fortunes of pretty much every one of us is tied up in some way or another in the markets.

And if those markets are not healthy, functional or properly regulated it’s an issue for us all.