The Irish Road Haulage Association has written letters to both the Taoiseach and the President of the EU Commission to highlight the "serious and far-reaching challenges" hauliers are facing due to Brexit and have warned of a complete standstill in trade if they are not addressed.

It also repeated its call for a single entity to take charge of the free movement of traffic from Irish ports.

In the letter to Taoiseach Micheál Martin, the IRHA said the approach being adopted by the authorities at the Irish Ports is creating an "unmitigated mess" in the post-Brexit environment, which is fundamentally undermining Irish trade and commerce.

The letter from the IRHA was also addressed to Tánaiste Leo Varakdar and Finance Minister Paschal Donohoe.

The letters were delivered as around 30 members of the IRHA staged a protest at Dublin Port today to highlight the problems hauliers have been facing since 1 January.

"Our members and their customers are experiencing appalling examples of lack of co-ordination by the Revenue, the Department of Agriculture, Food and the Marine and the HSE concerning checks on goods arriving in Dublin," Eugene Drennan, the President of the IRHA, said.

Instead of adopting an approach aimed at facilitating trade, the Irish authorities seem intent on operating disjointed, duplicating, uncoordinated and excessive checks on goods arriving into Ireland, Mr Drennan wrote.

"They are employing complex and excessive requirements in a way that will bring trade to a complete standstill if not addressed," he added.

Mr Drennan said there are some very practical steps that can be taken to address these challenges.

He added that the most important intervention would be the appointment of someone outside of the public service to review and oversee the manner in which the Revenue, the HSE, DAFM, the Gardai and the Port Authorities are managing the response to Brexit.

And now the letter for the Taoiseach. pic.twitter.com/aLcpyWlZE2

This appointment would ideally be someone with practical experience of trade and commerce and with a business background who can view the operation of arrangements from a first hand perspective and report back to Government and the EU Commission, he added.

In its letter to EU Commission President Ursula von der Leyen, the IRHA asked the Commission to intervene to address the "serious and concerning obstructions" to trade from Ireland arising from the imposition of border and custom's controls associated with Brexit. 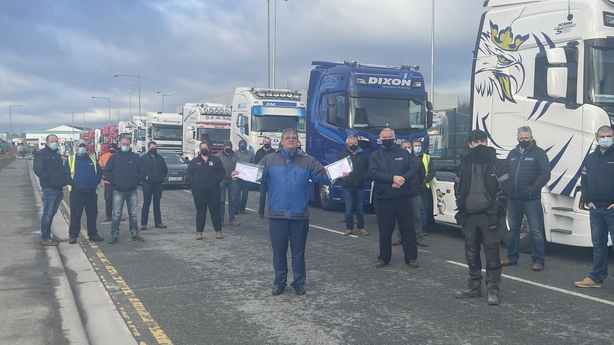 He told the EU Commission President that since 1 January, members of the IRHA and their customers have experienced serious and unnecessary obstructions to the free movement of goods in Irish Ports.

"We would be grateful for the Commission to address the serious problems and shortcomings with the manner in which new trading and customs rules are being applied by the Irish Customs and the Irish Department of Agriculture, Food and the Marine," he wrote.