Residential property prices rose on an annual basis for the first time in six months in November after disruption from the initial Covid-19 lockdown of the economy halted seven years of unbroken annual growth.

New Central Statistics Office show that residential property prices increased by 0.2% nationally in the year to November - the first annual increase since May and after a drop of as much as 0.9% in August.

On a monthly basis, home prices nationwide rose by 0.4% in November, unchanged from October.

Dublin house prices decreased by 1.1% and apartment prices increased by 0.9% in November. The CSO noted that the highest house price growth in Dublin was in South Dublin at 2.7%, while Dublin City saw a decline of 2.7%.

Outside Dublin, house prices were up by 1.1% and apartment prices increased by 1.9%.

The region outside of Dublin that saw the largest rise in house prices was the South East at 3%, while at the other end of the scale the Mid-West recorded a 4.3% decline.

Overall, property prices nationally have increased by 85.3% from their trough in early 2013. 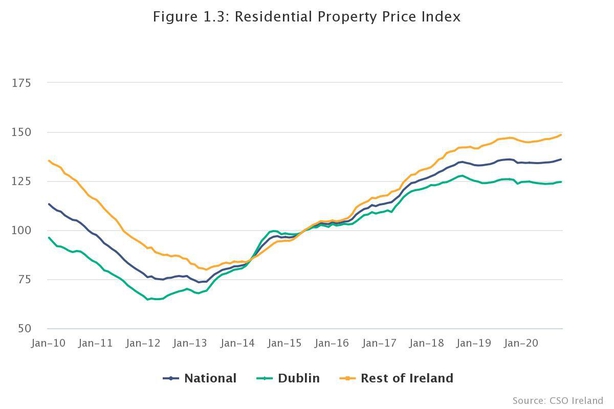 The mean price in Dublin stood at €442,555 and was the highest in any region or county.

Dún Laoghaire-Rathdown had the highest mean price in the Dublin region at €597,562, while South Dublin had the lowest at €364,592.

Longford was the least expensive county, with a mean price of €123,342, the CSO added.

In the year to November, a total of 37,413 home purchases were filed with Revenue.

The CSO also found the number of transactions has recovered in the property market.

In November there were 4,236 household dwelling purchases. This was 6.1% higher than the number recorded in November 2019 and a 10% on the number completed in October last year.

Existing dwellings made up the majority of purchases, accounting for 81.6%, while new dwellings accounted for 18.4%.