The latest Central Statistics Office figures show that new car sales fell by 25.6% in 2020 compared with the previous year due to the very low numbers of sales during the peak of the Covid-19 crisis.

Today's figures show that electric and hybrid cars continued to grow in popularity last year and these two categories accounted for 19.7% of new private cars licensed in 2020, compared with 12.7% in 2019.

The number of new hybrid and new electric cars licensed last year increased by 16.1% and 14.4% respectively, despite an overall drop in new cars licensed for the year.

Meanwhile, a total of 1,032 new private cars were licensed for the first time in December, a rise of 41.6% compared with December 2019.

The number of used (imported) private cars licensed increased by 11.5% compared with the same period in 2019, the CSO added. 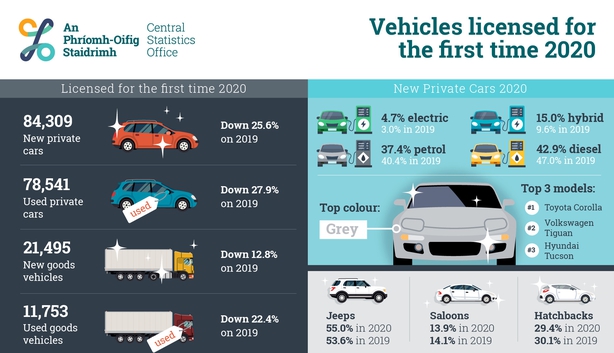 The most popular model of private car licensed last year was the Toyota Corolla, followed by Volkswagen's Tiguan and Hyundai's Tucson.