British new car sales fell nearly 30% last year in their biggest annual drop since 1943 as lockdowns to curb the spread of the coronavirus hit the sector, an industry body said today.

Demand stood at 1.63 million cars in 2020, according to data from the Society of Motor Manufacturers and Traders (SMMT).

The sector was particularly hard hit by a 97% fall in April, the first full month of a national lockdown.

Dealerships gradually reopened in June on differing dates across the UK.

"We lost nearly three quarters of a million units over three or four months, which we never got back," SMMT's chief executive Mike Hawes said.

Showrooms in England were closed again during a second lockdown in November but many were better prepared with "click and collect" options, allowing more purchases, but still leading to a 27% year-on-year slump.

The performance leaves new car sales at their lowest level since 1992, and suffering the biggest drop since 1943, when sales fell by more than 90%.

Then, Britain was fighting World War Two and industry was repurposed for the effort.

In 2020, diesel car registrations more than halved, while nearly 30% of sales were electric, hybrid and mild hybrid vehicles as Britain brought forward a ban on the sale of new combustion engine-only cars to 2030.

The car sector, like others, now faces the challenge of new lockdowns announced in England and Scotland this week.

The SMMT expects sales to be below 2 million this year, with the sector nervously looking ahead to March, one of the top two selling months of the year due to the change in the licence plate series. 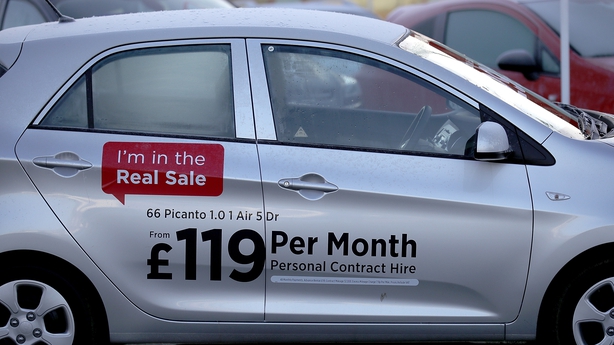 "Where the industry is focussed at the moment, is what do we need to do to try to sustain sales, sustain manufacturing over the next two to three months, especially with March being such a critical month for the industry and that will undoubtedly be affected," Hawes said.

The SMTT also warned that the Brexit trade deal will add additional costs to firms, despite the sector securing tariff-free trade with the European Union, just as it needs to pick up investment in electric vehicles.

On December 24, London and Brussels reached an agreement that secures zero-tariff and quota-free trade for the automotive sector, subject to vehicles containing a minimum level of parts sourced from the region.

The deal avoided any major disruption from January or a 10% tariff.

But the SMMT said additional bureaucracy and the need to approve vehicles separately in both the EU and Britain, among other costs, would add up.

"It can be high single-figure percentage cost to an individual manufacturer. This is not a free deal," SMMT's chief executive Mike Hawes said.

"The paperwork - you used to do it on a minority of vehicles. Now you're doing it on just about all your vehicles, apart for those that are going to the UK market," he stated.

The initial local content threshold is lower for electric vehicles, set at 40%, but due to rise, reflecting the high amount of battery content that comes in from Asia.

Britain and other European countries will be vying for more green investment, such as battery gigafactories, over the next decade as bans on conventional vehicles loom.

Workers this week called on French automaker PSA to build electrified vehicles at its northern English factory, in a major upcoming investment decision.

"One of the big challenges for the UK now is to see battery manufacturing established in the UK and grow in the UK to compete with Europe, and indeed, compete more globally," said Hawes.