Cargo workers at British Airways will strike from tomorrow until 2 January in a row over pay, with a new coronavirus strain already delaying goods arriving in the UK.

Around 850 workers will strike, affecting transportation of fresh food and other items flown by IAG Cargo, a spokesman for the Unite union said.

IAG is the parent group of BA.

Unite said BA cargo staff, mainly based at London's Heathrow airport, faced cuts to pay of up to 25% per worker.

"The nine-day strike will cause severe disruption to the company's ability to bring goods into the UK," a Unite statement said.

"The strike will potentially cause further disruption to the airline as importers have been seeking alternative ways to bring goods into the UK, in an attempt to avoid the chaos and disruption currently occurring at the country's ports," it added.

BA disputed Unite's claims on pay and urged the union to help resolve the situation through more talks.

"Our offer would see almost half of cargo workers' salaries rise, with no one else taking more than a 10% pay cut," the airline said in a separate statement.

"This planned industrial action by Unite helps no one and comes at a time when IAG Cargo is transporting critical supplies around the world and the aviation industry has been hit hard in 2020 by the global pandemic," it added.

Thousands of European truckers remain stuck close to the major cross-Channel port of Dover on England's south coast while the drivers wait to pass a Covid test in order to return to France. 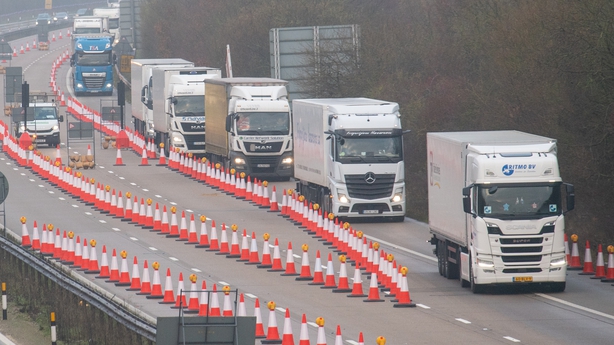 The chaos has triggered delays also from mainland Europe, although rail and sea links between the UK and France will remain open over Christmas to clear the backlog.