New Central Statistics Office figures show that almost six in ten enterprises in Ireland availed of the State's Covid-19 employment-related support schemes in the months from March to September.

Today's CSO figures show that 54.1% of enterprises put their employees on the Pandemic Unemployment Payment (PUP) during this period - this figure also included self-employed people.

The month with highest uptake of employment-related support was April when 57% of enterprises had staff in receipt of TWSS or PUP.

The CSO said this declined each month to September when 29.2% of enterprises availed of support - the lowest month in the period covered.

Those businesses with PUP recipients followed the same trend, peaking in April at 51.8% before declining to a low in September at 24.1%.

The TWSS peaked in July at 16% with the lowest uptake in March at 3.9% with the CSO noting that the scheme only started on March 26.

In September 10% of enterprises availed of the EWSS which had replaced the TWSS, the CSO said. 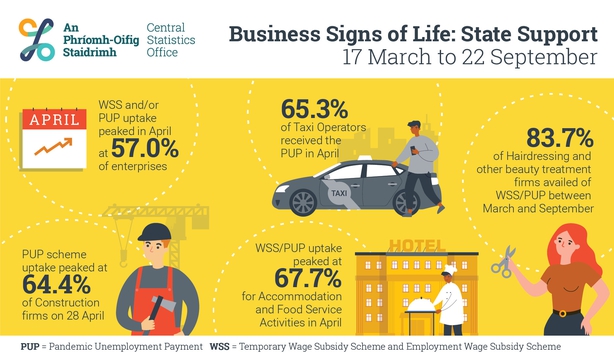 Today's figures show the sector with the highest proportion of businesses that had all staff on PUP in April were Other Service Activities - this includes hairdressers, funeral services and gyms.

It was followed by construction and transportation and storage.

Other activities with high levels of employment-related support take up were plasterers, painters and fitters, restaurant and mobile food services, beverage serving activities, hotels and taxis, the CSO said.