The Covid-19 pandemic has amplified a trend of chronic and worsening shortage of housing and this is already being reflected in house prices and rents.

This is according to the Trinity College economist Ronan Lyons who, in his latest report for the property website, daft.ie, says the low volume of properties for sale coming onto the market, combined with a fall in construction of new homes, has translated into an unprecedented scarcity of supply here.

He points out that since the pandemic reached Ireland in March, supply on the market has never been above 20,000 properties.

At the start of this month, market listings were as low as 15,390 - down one third on the already low figure recorded in the same month in 2019.

This, he said, had translated into strong increases in housing prices, especially in the second half of the year.

The daft.ie housing report is based on the list prices of properties when they go on the market.

It calculates that average list price rose by almost 7.5% in the year to December - the largest increase in three years.

The report points out that prices had fallen in the three months between April and the end of June before rebounding strongly in the second half of the year.

The latest official figures from the Central Statistics Office, which are based on stamp duty returns and therefore can contain something a lag, suggest that residential property prices nationally had fallen marginally in the year to October. 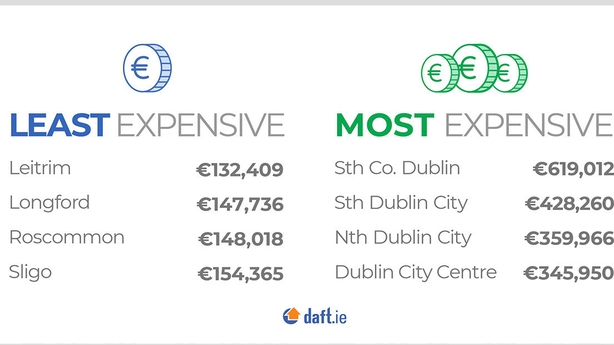 Economists were forecasting a drop in house prices of 10% or more in 2020 when the pandemic hit earlier in the year before revising those estimates to reflect a less severe scenario since.

"The first lockdown brought construction to a halt, while restrictions throughout the year have taken their toll on the number of second-hand homes put up on the market. The result is that the supply of homes to buy online is at a post-Celtic Tiger low," Ronan Lyons said in his report for daft.ie.

"A normalising of social and economic activity in 2021 will undoubtedly ease the situation somewhat. Nonetheless, the underlying issue remains: a chronic and worsening undersupply of new homes, in a country with strong need for housing over the coming decades."

A report from the Economic and Social Research Institute (ESRI) in recent days pointed to net population growth of just under a million people in Ireland between 2016 and 2040 which will bring the estimated total population to over 5.6 million people by then.

It calculates that 28,000 new homes would have to be built every year for the next two decades to keep pace with demand, although the Central Bank suggests the figure could be closer to 35,000 units a year.

According to various estimates, the construction industry is on course to deliver between 16,500 and 19,000 housing units this year, a reduction on the 21,000 completed last year.

Building sites were forced to close for several weeks here in March and April because of the pandemic restrictions.

Tax revenue to end of September just under €58bn