The Bank of England said it was ready to tolerate an inflation spike in the event of a no-deal Brexit in two weeks' time, but kept its stimulus unchanged as Britain and the European Union enter the end game of their trade deal talks.

The Bank of England, as expected, did not add to its £895 billion bond purchase programme, after ramping it up by £150 billion last month.

It also announced that it would continue purchases at their current pace until early February at least.

The Bank of England also kept its benchmark interest rate at a historic low of 0.1%.

London and Brussels are locked in negotiations to avoid the shock of import tariffs on trade from January 1, on top of the damage wrought by the Covid-19 pandemic.

The Bank of England said it was ready to accept inflation rising temporarily above its 2% target if a no-deal Brexit caused sterling to fall.

"Compared with previous periods during which non-negotiated Brexit outcomes had been possible, the economy was starting from a weaker position with greater spare capacity, increasing the Committee's tolerance for a temporary overshoot in inflation," the Bank of England said after today's meeting.

"It would be important to ensure that medium-term inflation expectations remained well-anchored," it added.

Samuel Tombs, an economist with Pantheon Macroeconomics, said the comments represented "the clearest signal yet from the MPC that they would ease monetary policy, in the unlikely event of no-deal".

Britain's budget forecasters say a failure to strike a trade deal would wipe an extra 2% off economic output in the short term, drive up inflation and unemployment and add to public borrowing of £400 billion this year.

Even with a deal, the Bank of England thinks the economy will suffer as companies struggle with paperwork, port delays and other effects of leaving the world's biggest single market. 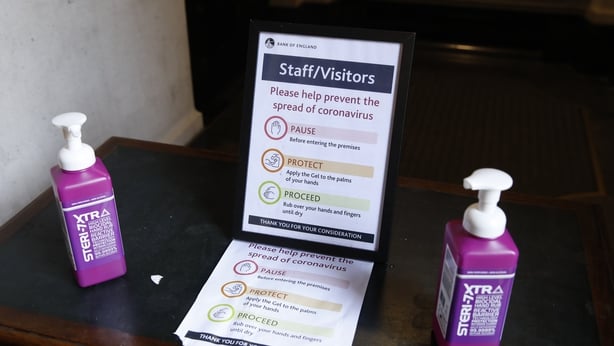 The bank's bond-buying programme is widely seen as its most likely weapon should it need to return to the stimulus pump.

It made no mention today about its review of the feasibility of taking interest rates below zero for the first time, something done in the euro zone and other countries.

The Bank of England said it planned to keep the pace of its purchases of British government bonds broadly unchanged in early 2021, but reiterated it could move faster "should market functioning worsen materially again."

Investors are betting increasingly on Britain and the EU striking a deal.

Sterling hit a two-and-a-half-year high against the US dollar today. EU Brexit negotiator Michel Barnier said "good progress" was being made.

The Bank of England also said Britain's economy was likely to shrink by just over 1% in the fourth quarter, less than its projection in November for a 2% contraction.

But the latest coronavirus restrictions were tighter than it had thought, so a recovery in the first three months of 2021 may be weaker than expected.

Vaccines were likely to support the economy, but MPC members had differing views on the extent of the boost.

The Bank of England extended by six months, until October 31, 2021, the drawdown period for lenders using its Term Funding Scheme for small and medium-sized enterprises.