A US pharmaceutical company is to close its manufacturing plant in Baldoyle in Dublin, threatening the future of 440 jobs there.

Viatris is to shut down the north Dublin plant, which makes generic medicines, over the next two years.

The company said a comprehensive redundancy package would be made available to the workers and the majority will remain in their posts until the end of 2022.

It has five sites in Ireland, but the other four employing 1,400 people are not affected by this decision.

Viatris was formed by a recent merger between Mylan and Upjohn, which closed in November.

In a statement, Viatris said it did not take the decision to close the Baldoyle plant lightly.

The company said it was committed to working with public officials and the community to identify appropriate potential alternatives for the site if at all possible.

It added that in the meantime it remains committed to treating those affected fairly and with respect.

The firm said there would be no immediate action taken and the majority of its workforce there will remain employed until late 2022.

It said: "Today's decision in no way reflects upon the company's genuine appreciation for the commitment and work ethic of the people in and community of Baldoyle.

"Viatris is grateful for the dedication exhibited at this site and its remaining workforce in Ireland will continue to play an important role in the company's future."

It said that following the closure of the oral solid dose manufacturing facility, it will still maintain a significant presence in Ireland. 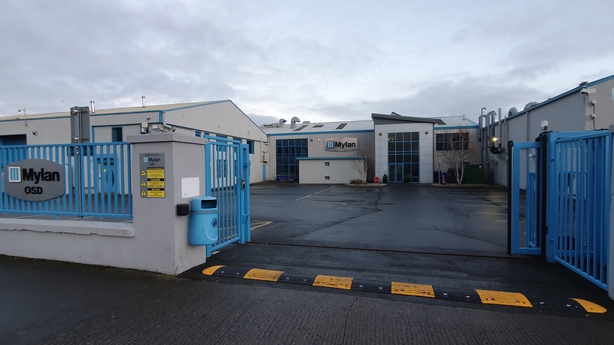 The company added: "The remaining operations workforce in Ireland will continue their focus on manufacturing sterile injectables at its Galway facility, which is also home to one of the company's injectable R&D centres; producing dry powder inhalers at its world-class respiratory facility in Dublin; manufacturing oral solid doses and other medicines at its facility in Damastown; and producing active pharmaceutical ingredients at its plant in Little Island in Cork.

The firm said it will be offering employees comprehensive separation packages, including pay and healthcare continuation, career counseling and continued coverage under the Employee Assistance Programme.

The Baldoyle closure is the result of a global restructuring initiative by the Pittsburgh-based firm, which aims to achieve cost savings of $1 billion by the end of 2024.

The company said it plans to rationalise its global manufacturing and supply chain network, by either closing, downsizing or divesting up to 15 facilities.

It said these facilities are no longer viable due to surplus capacity, challenging market dynamics or a shift in its product portfolio towards more complex products.

The company said that wherever feasible it will seek to find potential buyers for the facilities in order to preserve as many jobs as possible and will work with affected communities to identify appropriate potential alternatives.

"Any workforce actions the company takes as part of this restructuring initiative will be implemented in a way that is consistent with its long-standing commitment to treating employees fairly and with respect," it said.

Other plants in the US, Puerto Rico, Poland and India will also be hit, with up to 20% of the 45,000 strong workforce across the world to be affected.

"We have been continually engaged with the company and will work over the next two years to secure alternative investment," IDA Ireland said in a statement.

"This is part of the company's global strategy, it is not Ireland-specific and the company's other operations in Ireland are not impacted."

Tánaiste Leo Varadkar said the news was devastating for those working in the company.

The Minister for Enterprise, Trade and Employment said: "The Government will make all necessary State assistance available to the workers and we will work across Government, to help all workers to find new jobs and education and training opportunities when the reductions are made."