The visit by US President, Donald Trump last year to his luxury County Clare golf resort contributed to revenues at the resort increasing to €11.99m for 2019.

The Trump organisation purchased the resort for a knock-down price in 2014 and since then President Trump has visited the resort seven times.

The most high profile visit was in June of last year, which was the billionaire's only visit to Ireland while President of the United States.

The two night visit by the President provided a wind-fall for the resort when it received €107,625 for providing food and catering to Gardai on overtime protecting the President.

Overtime payments of €7.48m were paid out to 3,820 Gardai in connection with the visit.

General Manager at the resort, Joe Russell stated in the aftermath of the visit last year that the resort must follow US Government protocol and a strict mandate for visits by Mr Trump to ensure "we do not make a profit from the Presidency".

The new accounts for TIGL Ireland Enterprises Ltd show that the resort firm recorded a pre-tax loss of €1.378m for 2019 due to non-cash depreciation and amortisation costs of €1.58m.

The Covid-19 pandemic has resulted in two Government enforced closures of the resort this year while international travel restrictions has decimated the resort’s US market for 2020.

In a note attached to the accounts on the Covid-19 impact, it states that the directors continue to monitor the situation closely "and have implemented strict cost control measures to provide financial flexibility".

The note says that the company is working to protect its cash position and liquidity into the future.

The note also says that the group "has the support of its related parties who have provided funding for capital improvements over the past number of years".

The note adds that the impact of Covid 19 on the business into the future "will depend on the duration and spread of the outbreak and the related impact on consumer confidence and spending, all of which are highly uncertain in the current environment".

The directors believe that the business has sufficient liquidity and support to meet its obligations as they fall due. 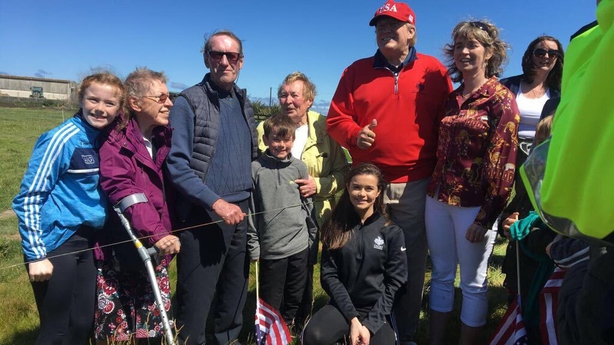 Statistics released by the Revenue Commissioners in October show that the Trump firm was one of the more than 66,500 firms here to benefit from financial supports for employees made through the Government's Covid 19 Temporary Wage Subsidy Scheme (TWSS).

The new accounts confirmed that last year, the Trump Organisation spent €923,811 in capital improvements at the resort and this followed a spend of €1.2m under the same heading in 2018.

According to the directors' report, "the owner’s commitment to invest in its facilities over the past number of years has resulted in significant annual improvement to the group’s operating results before depreciation and tax".

On the resort’s future developments, the directors state that they are in the process of upgrading various facilities at the resort.

They state that "it is expected that this will enhance the customer experience and have a positive impact on the group and the company’s operating results".

Last year. the resort received a boost with Clare County Council granting planning permission for a €40m plan that includes 53 holiday cottages, a ballroom/function room, a leisure centre and a new restaurant.

However, the resort’s expansion plans suffered a blow earlier this year when An Bord Pleanala refused planning permission for coastal protection works at the resort.

The resort is the single largest employer in west Clare and last year staff costs increased by 3.5% from €6.35m to €6.57m as numbers employed increased from 221 to 230.

At the end of last year, the company’s shareholder funds totaled €19.3m.

The company last year recorded a gross profit of €10.2m and administrative expenses of €10m resulted in the operating profit of €209,858.

US President Donald Trump’s sons, Eric and Donald Jnr remain on the board of the Trump Doonbeg firm.

President Trump and his daughter, Ivanka stepped down as directors on January 19th 2017 - one day prior to President Trump’s inauguration.

The accounts were signed off by directors, Eric Trump and General Manager, Joe Russell on November 21st.