Ireland had the third highest mortgage interest rates across the euro area in September, the Central Bank said, with only Greece and Latvia higher.

The average interest rate on new mortgages agreed here stood at 2.78% in September, down five basis points on the previous month.

The average for the euro area stood at 1.34% in September, although the rate varied considerably across countries, the Central Bank said.

Today's Central Bank figures show that the volume of new mortgage agreements amounted to €672m in September, down 14% on the same time last year.

However, the Central Bank said the September figures marked a jump of 44% when compared with August amid the Covid-19 crisis.

A total of €540m was agreed in new fixed rate mortgages, and €132m in variable rate mortgages in September, the Central Bank said.

Meanwhile, new consumer lending agreements stood at €168m in September, a decrease of 13% on the same time last year.

The Central Bank noted that the average interest rate on consumer loans was 7.54% in September compared to a euro area rate of 5.23%.

Commenting on today's figures, Bonker.ie's Darragh Cassidy said that mortgage holders here who take out a €250,000 mortgage over 30 years will pay just over €180 more each month compared their euro zone counterparts. 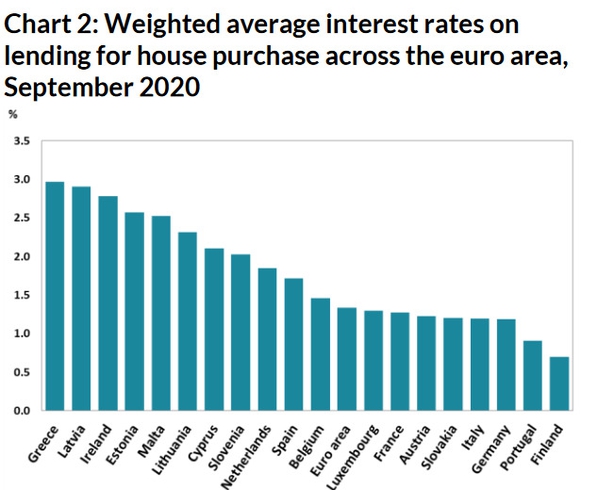 Mr Cassidy said there is still a lack of competition in the Irish mortgage market despite the arrival of new entrants to the market including Avant Money.

"The issue around home repossessions, and the inability of banks to take back a property if a loan has gone bad, is also a factor in Irish mortgage holders facing higher rates.

He also said that banks are still dealing with the cost issues and capital requirements regarding bad loans on their books from the last financial crisis and the fear is that the Covid-19 pandemic is going to worsen this problem, which will lead to upward pressure on rates again in the near future.

Sinn Féin called on the banks to cut their rates.

"Covid-19 has been a difficult time for borrowers, many of whom have lost their jobs," said Finance Spokesman, Pearse Doherty.

"For those who took payment breaks, they were charged additional interest due to the inaction of this government to protect them."

"As we emerge from this crisis, the Irish mortgage market, and the interest rates charged to borrowers, must be tackled."