Marks & Spencer has today reported the first loss in its 94 years as a publicly listed company after clothing sales were hammered by the Covid-19 pandemic.

But an encouraging performance in food sent its battered shares higher. M&S shares rose by 5% this morning, paring 2020 losses to 55%.

Investors were taking comfort that the half year loss was not as bad as feared and from the initial success of a partnership with Ocado which has given M&S's food business an online presence for the first time.

Marks & Spencer was struggling to reinvent itself after decades of failed attempts before the pandemic hit.

In May, it said the crisis would indelibly change its business and it would accelerate the latest turnaround plan, delivering three years of change in one. In August, M&S cut 7,000 jobs.

The outcome was ahead of analysts' average forecast of a £59m loss. M&S made a profit of £176m the same time last year.

Clothing and homeware revenue slumped 40.8%, damaged by a three-month coronavirus lockdown in the spring.

All clothing retailers have been hurt by the crisis. Primark yesterday reported a 63% fall in annual profit and Next last week forecast a 50% decline.

M&S's first-half food sales rose 2.7% on a like-for-like basis, with weak performances from stores in city centres and transport hubs because of the government's work-from-home directive offset by a better showing from suburban stores. 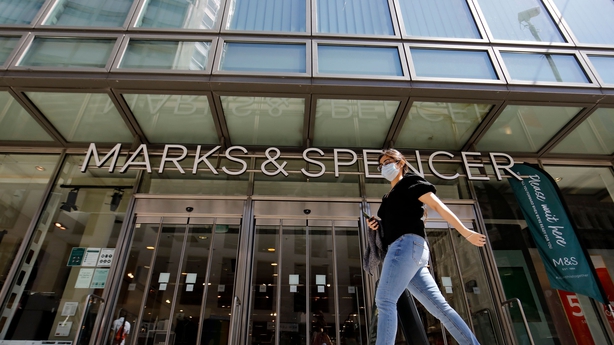 Chief executive Steve Rowe said the September launch of the Ocado venture had gone "fantastically", with customer reaction ahead of expectations.

And despite the loss he struck a confident tone, telling reporters: "We're building an M&S which is fitter, faster and more digital and is ready to emerge as a stronger, renewed business."

Marks & Spencer is lobbying the UK government for store trading hours on Sundays to be extended in December to help make up for lost trade in November's Covid-19 lockdown, its boss also said today.

"We are lobbying quite hard with the rest of the industry for the extension and de-regulation of some Sunday hours, particularly as we get closer to Christmas," chief executive Steve Rowe told reporters.