The chief executive of Ryanair has criticised the National Public Health Emergency Team, saying it got it wrong on care homes, meat factories and face coverings - and on international travel during the summer too.

Eddie Wilson made his comments to the Oireachtas Transport Committee today, adding that the "strangulation" of the aviation sector is continuing.

Mr Wilson said the Green List has been a disaster and he called on the Government to implement the EU traffic light system immediately.

He said Ireland has cut itself off from the EU, adding that people in Germany, France, Sweden, Belgium and Spain can travel anywhere within the EU.

There is no data out there to suggest air travel is not safe, he told the committee.

The Ryanair CEO also said he found it "extraordinary" that neither Transport Minister Eamon Ryan nor Hildegarde Naughton, the Minister of State for International and Road Transport and Logistics, had contacted Ryanair since its last appearance before the committee on 7 October.

He said the closure of the airline's bases at Cork and Shannon could have been minimised and said the question now is will they reopen.

Mr Moriarty said it is clear from the evidence that international travel is not a vector for Covid-19.

He said any pre-departure tests that are required for passengers have to be rapid and affordable, adding that only a fast antigen test will facilitate a meaningful increase in safe international travel.

The Aer Lingus executive said that several airports in Europe are introducing antigen tests and it is clear they are becoming prevalent in the solution for facilitating international travel.

Eddie Wilson said the official Government policy since March has been to tell its citizens not to fly.

He said the Government has put "an anchor around the necks of airlines" which resulted in Ryanair closing its bases at Cork and Shannon for the winter.

The Government was "faffing around", the Ryanair CEO stated. 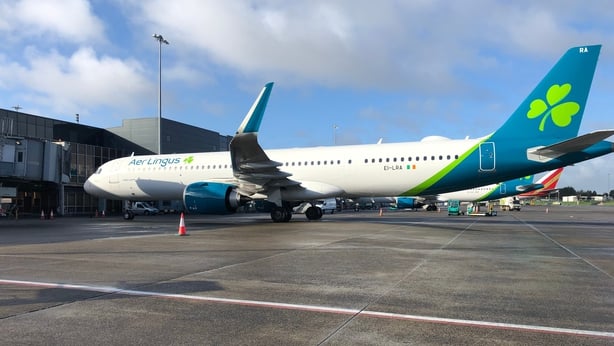 Donal Moriarty said the "toxicity" in relation to travel has to be removed. He said the narrative has been delivered largely by government policy and that has to change.

He was challenged by Sinn Féin's Darren O'Rourke after the Aer Lingus executive quoted a report that said the chances of contracting Covid-19 from flying was one in 27 million.

Deputy O'Rourke said the same report also says there is no way to establish an exact tally of possible flight associated cases.

He said the one in 27 million figure was "incredible and not based on sound science". He said the role the aviation sector plays in spreading the virus had to be acknowledged.

The 'traffic light' system to co-ordinate international Covid-19 travel restrictions across the continent will come into here from 8 November.

But both Ryanair and Aer Lingus said the new system will not be a panacea.

Eddie Wilson said even with the new system in place there is a reasonable chance that Cork and Shannon won't reopen because he said the exact details of the plan are still not known.

Donal Moriarty said it had been Aer Lingus' plan to recommence Shannon to Heathrow in December but that will now not go ahead.

He said it is now hoped that route along with Shannon-Boston, and Shannon-JFK will resume in April but he said that was dependent on a significant easing of restrictions.

The CEO of Shannon Airport said the Ryanair announcement today is really disappointing.

Mary Considine said it was disheartening for employees at the airport who've worked hard to keep it operational during the pandemic.

She said there was now genuine worry among businesses about the future of the airport.

Also speaking in front of the Oireachtas Transport Committee, she said the news was also a huge disappointment for its loyal customers.

She said it shows how critical the situation has become and how vulnerable the aviation sector is.

She said it also shows the need for urgent financial assistance.