But property prices were up 0.3% on a monthly basis as the housing market showed signs of recovering from Covid-19 disruption.

Home prices fell on an annual basis for the first time in seven years in July. Prices had been broadly stable in the year to July, after big increases in the previous five years.

Property websites have reported recently that asking price inflation is accelerating again, while mortgage lending is also returning to normal levels following the Covid-19 lockdown of the economy earlier this year.

Today's CSO figures show that Dublin residential property prices saw a decline of 1.6% in the year to August with house prices down by 1.4% and apartment prices rising by 0.1%.

The highest house price growth in Dublin was in Fingal at 1.7%, while Dublin City saw a decline of 3.4%.

Meanwhile, residential property prices in the rest of the country were 0.3% higher in the year to August, with house prices up by 0.4% and apartments down by 0.7%.

The region outside of Dublin that saw the largest rise in house prices was the South-West at 5.2%, while at the other end of the scale, the Border saw a 2.7% decline.

Today's figures also show that a total of 2,359 home deals were filed with Revenue in August, down 40.2% compared to the 3,947 purchases the same time last year.

The total value of transactions filed in August was €699m, the CSO noted.

Property prices nationally have increased by 83.8% from their trough in early 2013, according to the CSO. 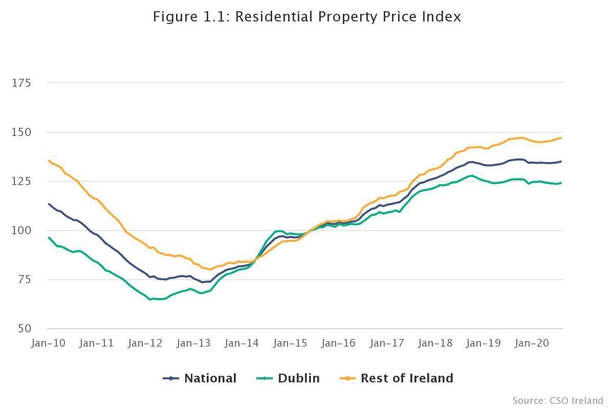 Today's CSO figures show that households paid a mean price of €294,881 for a home on the residential property market in the 12 months to August.

The mean price in Dublin at €442,282 was the highest in any region or county.

Dún Laoghaire-Rathdown had the highest mean price in the Dublin region at €605,056, while South Dublin had the lowest at €360,616, the CSO said.

Commenting on today's CSO Residential Property Price Index for August, the Institute of Professional Auctioneers and Valuers, said while the number of dwelling purchases in August plummeted by 40.2pc compared with August 2019, the indications are that the situation has improved considerably since then.

"While activity has ramped up as the industry has adapted amid the pandemic, the lack of supply of properties is an issue, along with affordability and with lenders acting in a severe risk averse way," he said.

"Much will now depend on the success or otherwise of the Government's Budget measures.  Supply needs to be ramped up and affordability improved," he said.