New figures from the Central Statistics Office show that the number of new cars licensed for the first time in September jumped by 40% to 5,747 from 4,104 the same time last year.

This was due to the very low numbers of cars licensed during the peak of the Covid-19 crisis.

Today's licensing figures for September also show that Volkswagen was the most popular make of new private car licensed followed by Ford, Skoda, Toyota and Kia. Together these five makes represent 45.9% of all new private cars licensed in September 2020. 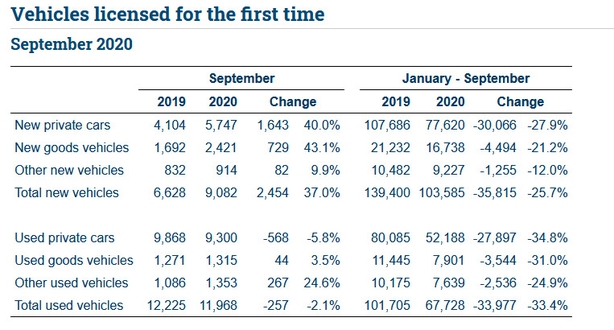 They also show that in the first nine months of 2020, 43% of all new private cars licensed were diesel, compared with 46.8% the same time last year.

The CSO said that comparing its figures with the recently published Society of the Irish Motor Industry (SIMI) figures, it is important to note that 53.4% of new cars licensed in September 2020 were registered before September.

The monthly licensing (CSO) figures and the registration figures (SIMI) differ due to the different dates on which a vehicle is registered (number plate) and licensed (tax disc).

A vehicle may be registered by a dealership in advance of a sale, and vehicles which are registered in a given month may not be licensed until a later month.