Rents fell by 0.6% nationally between the first and second quarters of the year to stand at €1,226 from €1,233, the latest rent index from the Residential Tenancies Board shows.

The RTB said the 1.8% annual growth rate in the national standardised average rent in the second quarter marked the lowest level of increase since 2012, with the rental market affected by the Covid-19 crisis.

The RTB Rent Index is compiled in conjunction with the Economic and Social Research Institute and is based on actual rents paid on 16,857 tenancies registered with the RTB in the quarter.

It includes homes new to the rental sector, new tenancies in existing housing stock and renewals of existing tenancies.

Today's index shows that the standardised average rent in Dublin stood at €1,709 and €928 outside of Dublin.

Compared to the previous quarter, rents outside Dublin increased by 0.3%, while they decreased by 1.5% in Dublin.

On an annual basis, Dublin experienced no growth, while rents outside Dublin grew by 3.4%, today's index also reveals.

The high rental levels in these areas relative to other counties reflects the concentration of demand close to the country's largest employment hubs, the RTB explained. 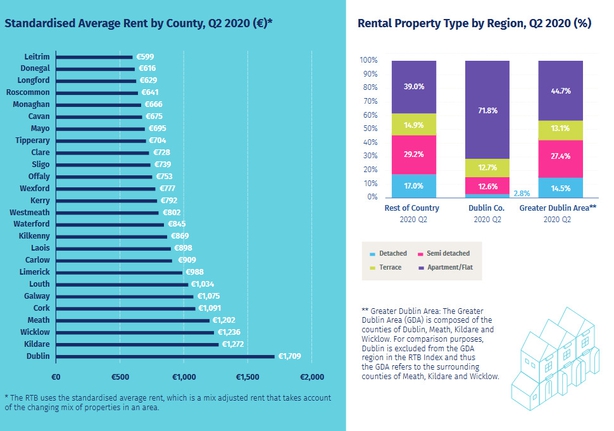 The RTB also noted that annual growth moderated in most counties and the standardised average rent in 13 counties was lower in the second quarter of the year compared to the first quarter. 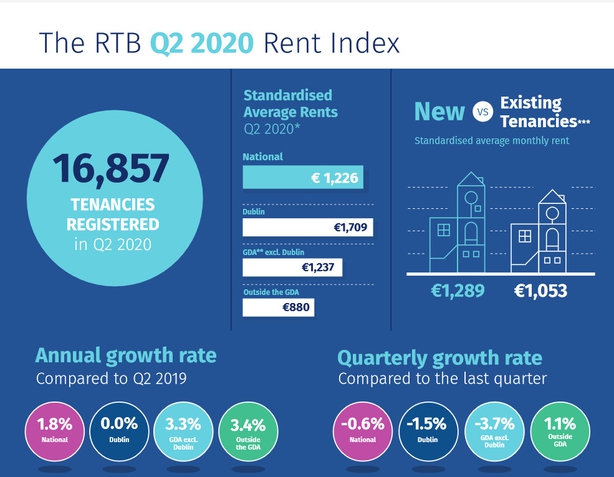 Padraig McGoldrick, Interim Director of the RTB, said it was clear that the Covid-19 pandemic has significantly impacted the rental sector, with annual growth moderating and rent levels slowing compared to the first three months of the year.

"There are considerable changes across the country with the Greater Dublin Area (excluding Dublin) seeing the greatest adjustment in prices with rents falling by 3.7% between Q1 and Q2 and Dublin experiencing no growth on an annualised basis," Mr McGoldrick said.

Conor O'Toole, Senior Research Officer at the Economic and Social Research Institute, said that the economic shock associated with the pandemic has been the sharpest and most rapid in living memory.

"These economic adjustments are beginning to feed through into the rental sector with rental inflation moderating across the country. The drop in inflationary pressures has been strongest in the Dublin area which is the country's largest rental market," Conor O'Toole said.

"It is likely that continued downward pressure will be exerted on rents in the short term as the economy continues to struggle under Covid-19 conditions," he added.

Meanwhile, the Monasterevin and Kildangan electoral divisions in Co Kildare have been designated as new Rent Pressure Zones.

This means that the entire administrative area of Kildare County Council is now designated a Rent Pressure Zone, which means that rents cannot be increased by more than 4% a year in these areas.

In response to the publication of the index, John-Mark McCafferty, CEO of Threshold said, "While the 1.8% year-on-year increase in rents nationally is the smallest increase since 2012, given the fact that there was little movement in the quarter as a result the emergency Covid-19 restrictions, this was to be expected.

"Looking at the longer-term picture, rents have grown 62% since Q2 2012. In the context of this, an increase of 1.8% is still not a sign of a more affordable rental market. Conversely, if rents were to decrease at a rate of 1.8% per year, it would take almost 30 years for rents to return to 2012 levels."