The Covid-19 crisis continues to have a "significant" impact on the labour market here, new figures from the Central Statistics Office confirm today.

They show that the unemployment rate, including those receiving temporary Covid-19 jobless benefits, fell to 14.7% at the end of September from a revised level of 15.3% a month earlier.

The jobless rate, which stood at 4.8% before the coronavirus crisis, hit a record 28.8% in April after 600,000 people claimed the special payments, which are due to expire next April.

When those on the Covid-19 payments are excluded, the CSO said the unemployment rate rose to 5.4% in September from 5.2% in August.

Today's CSO figures show that the seasonally adjusted number of people who were unemployed stood at 126,200 in September, up from 121,100 in August.

Breaking the results down by age group, the CSO said the monthly unemployment rate for those aged 15 to 24 years was 18.9% in September, while it was 3.8% for those aged 25 to 74 years.

Commenting on recent proposed changes to the Covid-19 income supports such as the PUP and the TWSS, the CSO said they were originally set up as short-term emergency income supports.

But it noted that they have been extended several times and there have been changes made in terms of the eligibility criteria and how they are being administered. 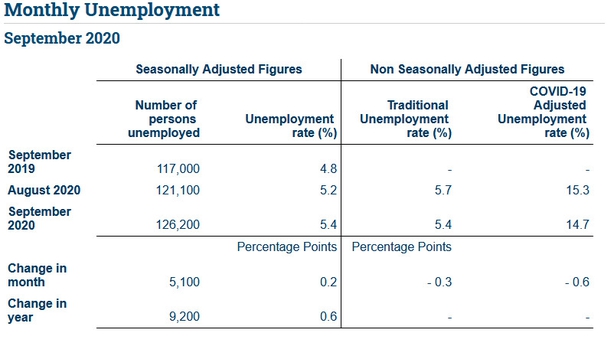 "While the PUP and the TWSS were both expected to cease in August, the latest announcements have indicated that the PUP is expected to continue further into 2021 while the TWSS has been replaced by the Employment Wage Subsidy Scheme from September," the CSO said.

It said it will continue to evaluate the current income support schemes and any new schemes to determine whether any changes are required to the methodology for its traditional or Covid-19 adjusted estimates.

Jack Kennedy, economist at global job site Indeed, said the country's labour market recovery so far has been impressive, bouncing back quickly from the record high Covid-adjusted unemployment rate of 28.2% in April. But Mr Kennedy said that there is "still a long way to go".

"While the continued decline is a welcome sign, the Covid adjusted rate still stands at 14.7%, almost 10 percentage points higher than the standard rate this time last year," he added.

The economist said that as the economy is now officially in recession, the upcoming Budget will be pivotal in determining how the labour market recovers.

"As with previous downturns, the impacts can be unevenly felt and threaten to deepen the divide across sectors, regions and age groups," he said.

"We are seeing a 'K-shaped recovery' whereby those in better financial positions are less impacted than those less well off. This strongly correlates to those who can work from home, often higher paid jobs, and those whose work requires a physical presence, often jobs at the lower end of the pay scale," he added.

According to Jack Kennedy, the resilience of sectors like pharmaceuticals and technology have helped soften the shock to the economy here.

But he stressed that small and medium enterprises may need more labour support measures, as they employ 70% of the workforce in Ireland.

"The effects of local lockdowns may have been balanced by the nationwide reopening of pubs, but the coming weeks will likely tell us more about the effects these temporary lockdown measures have brought," he added.