The parent company behind Ulster Bank has said its strategy to grow the bank's business in Ireland organically and safely remains unchanged but is under review.

In its first response to reports that it is considering winding down Ulster Bank’s operations here, NatWest said it continues to evaluate the impact of Covid-19 and the challenges to the economy.

The London-based group said as a result, it is reviewing its strategy appropriately and responsibly in light of these events.

"In the event of any changes being made to our strategy, these would be undertaken with full consideration of any impact on customers, colleagues and shareholders in the first instance," it said in a statement.

"Our priority now is to continue to remain focused on supporting our customers and colleagues in these difficult times."

"It's important to emphasis to your colleagues and to customers that we have seen commentary like this before and this, like previous stories, is also speculative," Jane Howard said.

"I know that it can be distracting but I would ask that you please stay focused on serving our customers well," she added.

According to last night's report in the Irish Times, the wind down of Ulster Bank's Republic of Ireland operations is one of a number of options being considered as part of a strategic review by NatWest.

Other possibilities being looked at include merging Ulster Bank with another lender, the Irish Times stated.

In her note to staff, Ms Howard referred to comments by NatWest CEO Alison Rose in July who said the group's strategy was and is to grow Ulster Bank "organically and safely".

She said the group had been successful in "growing both the person(al) mortgage and some of the commercial share in 2019."

"That strategy hasn't changed. Clearly Covid-19 presents different challenges to the economy and we will continue to consider all strategic options in relation to that business," she added.

Ulster Bank has declined to comment on the issue.

The Financial Services Union (FSU), which represents up to 70% of the more than 2,500 staff at Ulster Bank, said it held an emergency meeting of its Ulster Bank negotiating team last night.

John O'Connell, Financial Services Union general secretary, said the communication to staff to this morning by the CEO raised more questions than answers and adds to staff and customer concerns.

Speaking on RTE Radio One's Today with Claire Byrne, Mr O'Connell said the FSU has written to the bank.

He said the union had good engagement in good faith with the bank in the last number of weeks over an ongoing redundancy programme, but it now seems a vital piece of information about a strategic review being under way was withheld from them. 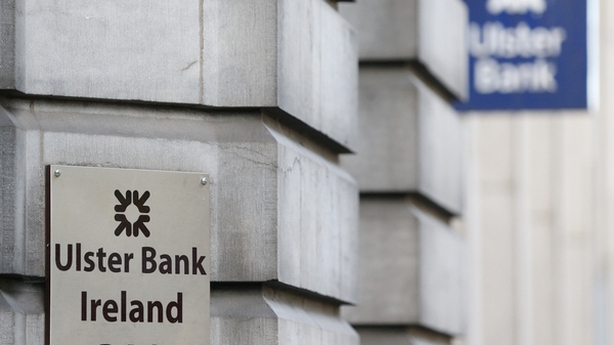 As a result, he said, the news had come as a huge shock to the union and staff, who are "outraged".

Mr O'Connell said NatWest now needs to publish the terms of the reference of the review, reveal what other options are on the table and what the outcome is when it is concluded.

He also called for the Minister for Finance to contact NatWest and seek assurances about Ulster Bank's future role in the Irish banking system.

A spokesperson for the Department of Finance said the media reports surrounding Ulster Bank had been noted.

The spokesperson said that Ulster Bank Ireland has 88 branches and approximately 2,800 employees and a sizeable market share in terms of mortgage lending and SME lending.

It is important to have competition in every sector, but particularly in banking in order to provide greater choice and lower cost services for customers, the spokesperson added.