The number of property transactions recorded a big drop in July, according to the latest figures from the Central Statistics Office, as Covid-19 continued to impact the housing market.

The CSO said that a total of 2,561 household dwelling purchases were filed with Revenue in July, a drop of 40.7% compared to the 4,316 purchases in July of last year.

However, the number of home purchases in July was up 12.9% on June, the CSO said.

Today's figures from the CSO show that residential property prices fell by 0.5% on an annual basis in July, with prices in Dublin declining by 1.3%.

Residential property prices in the rest of the country, excluding Dublin, were 0.2% higher in July compared to the same time last year.

The CSO said that Dublin house prices decreased by 1.2% and apartments increased by 0.4%.

It noted that the highest house price growth in Dublin was in Dun Laoghaire-Rathdown at 1.3%, while Dublin City saw a decline of 2.7%.

Meanwhile, house and apartment prices in the rest of the county saw growth of 0.3% in July.

The region outside of Dublin that saw the largest rise in house prices was the South-West at 4.3%, while at the other end of the scale the South-East reported a 1.6% decline.

The CSO said that property prices nationally have increased by 83.5% from their trough in early 2013.

Dublin residential property prices have risen 91.4% from their February 2012 low, while prices in the rest of the country are 83.6% higher than at the trough, which was in May 2013.

Today's figures show that households paid a mean price of €295,825 for a home on the residential property market in the 12 months to July. 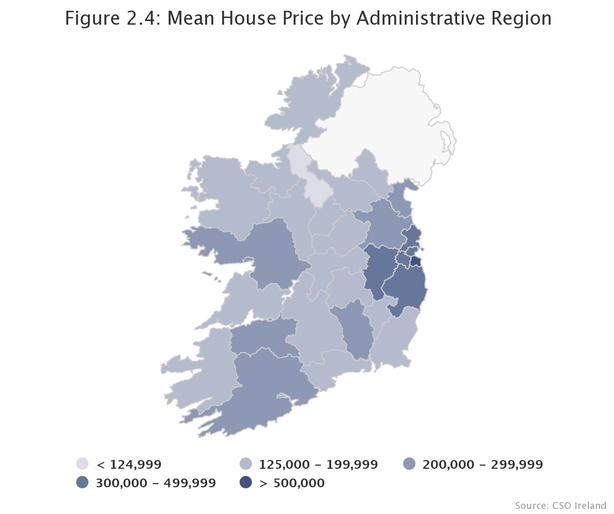 The mean price in Dublin stood at €443,115 and was the highest in any region or county.

Dún Laoghaire-Rathdown had the highest mean price in the Dublin region at €607,667, while South Dublin had the lowest at €363,330.

House prices have stabilised over the last 18 months, having shot up for five years following a crash just over a decade ago.

Property prices increased by 0.3% in July compared to June, the CSO said.