The global recession this year will not be as deep as expected as a result of countries' efforts to counter the economic fallout from the coronavirus pandemic, the OECD said today.

But the recovery next year will also be more modest than anticipated, the Organisation for Economic Co-operation and Development said.

It has projected a contraction of 4.5% in global economic output this year and a return to growth of roughly 5% in 2021.

In its previous set of forecasts in June, the Paris-based OECD had been expecting the global economy to shrink by 6% in 2020 and return to growth of 5.2% next year.

"After the initial bounce-back in many activities following the easing of confinement measures, there are some signs from high-frequency indicators and business surveys that the pace of the global recovery has lost momentum since June, particularly in many advanced economies," the OECD said.

It pointed out, however, that "the economic outlook remains exceptionally uncertain, with the Covid-19 pandemic continuing to exert a substantial toll on economies and societies".

In the second quarter of 2020, global output was more than 10% lower than at the end of 2019, "an unprecedented sudden shock in modern times", the OECD said. 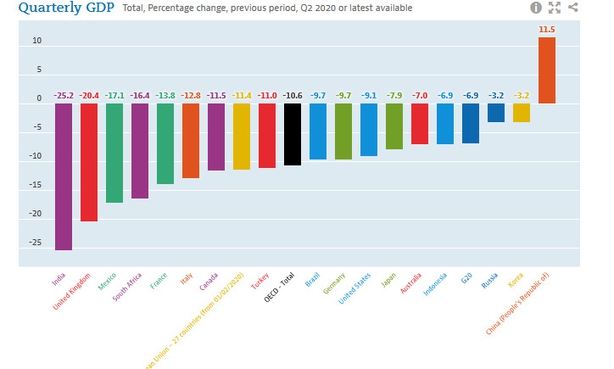 The extent and timing of the pandemic shock differed across the major economies, but all experienced a sharp contraction in activity as necessary containment measures were implemented.

Global trade collapsed, declining by over 15% in the first half of 2020, and labour markets were severely disrupted by reductions in working hours, job losses and the enforced shutdown of businesses.

"Without the prompt and effective policy support introduced in all economies to cushion the impact of the shock on household incomes and companies, the contraction in output and employment would have been substantially larger," it said.

Looking at individual economies, China was expected to be the only one to expand in 2020, with projected growth of 1.8%.

India, on the other hand, would see its economy shrink by 10.2%.

The US, the world's biggest economy, would fare better than the global average, with a projected contraction of 3.8% this year.

Germany would perform better than the euro zone as a whole, with its economy set to shrink by 5.4%, compared with a contraction of 7.9% for the single currency area.

Future growth prospects would depend on factors including the severity of new virus outbreaks, the type of restrictions imposed, vaccine deployment and the effects of fiscal and monetary policy actions on demand, the OECD said.